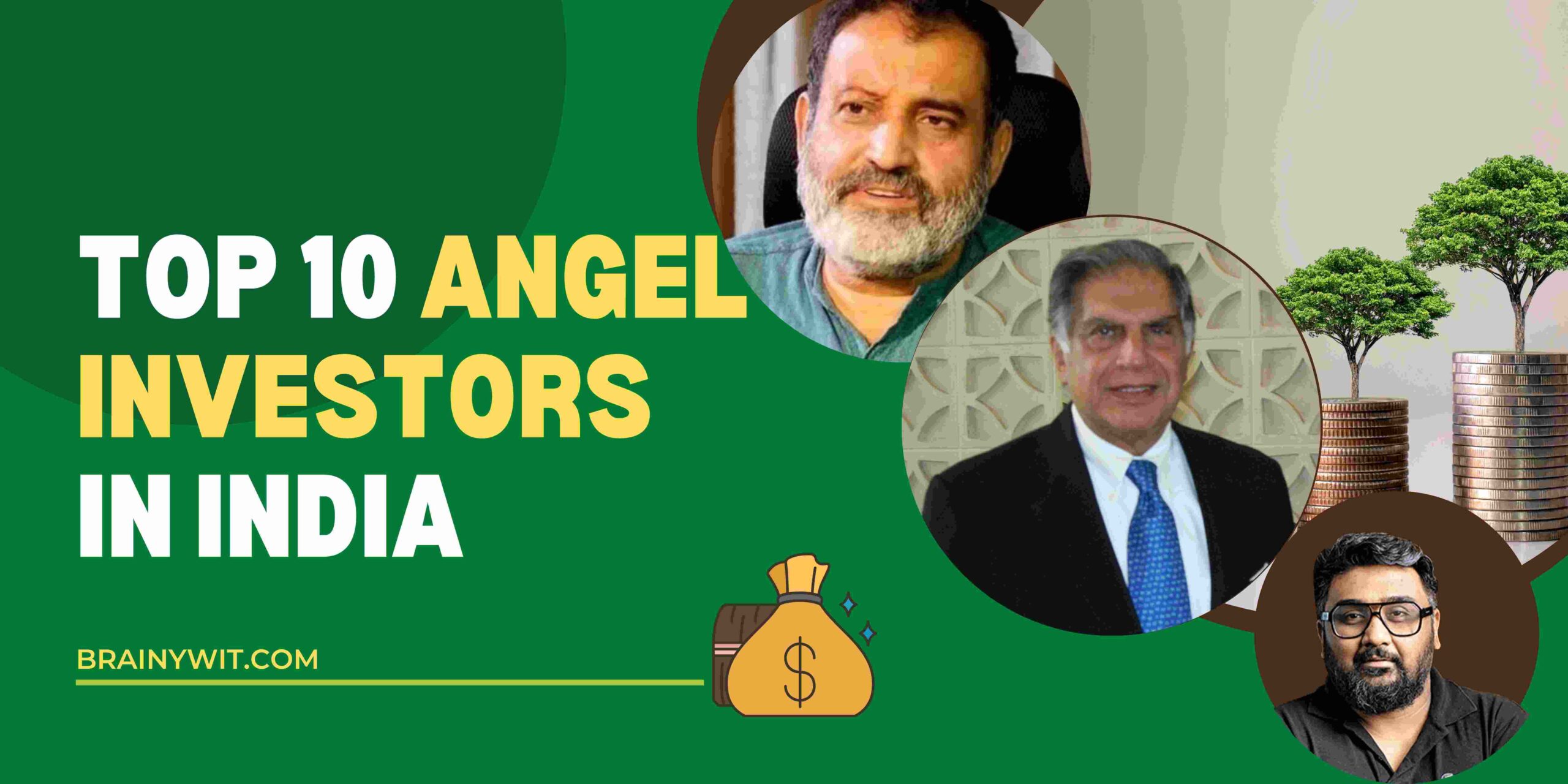 With India being rolled the red carpet for its big boy entry of 42 startups into the “Unicorn baby” club, it is time that the world sits up and takes notice. Who are these top angel investors in India who are making it Big and helping others too on the way? What is their modus operandi and how can you get angel investments from these top guns in business? Let us help you unpack information about the top 10 angel investors in India.

The year 2021 saw the startup ecosystem cross $100 Bn in receiving funding since 2014, thanks to the rapidly growing angel networks in India. Over $42 Bn was invested in startups, by far the highest amount raised by Indian startups in a single year. So, the question lies, how to get top angel investors in India?

Who is an angel investor?

According to Forbes, Angel investors are individuals who offer promising startup companies funding in exchange for a piece of the business, usually in the form of equity or royalties.

How does it work?

Angel investors tend to get involved in the early stage of a company, at the “seed” or “angel” funding phase. That means the investment can flow in when the company exists only as an idea, or it could come when a business is already up and running.

It may come from close networks and family who believe that the idea has the potential to take off. Typically, initial business funding isn’t substantial—it’s common for founders to roll out their product or service with $10,000 or so in initial funding. Angel investors are literally the 1st ones to take out cash to start a business.

Their role is to get the company to showcase the product or stand up, typically before a company requires a more sizable investment from a venture capital company. Angel investors help businesses to land on their feet.

Is there a difference between venture capitalists and angel investors?

Angel investors are private investors who invest their own money. Angel investors can be typically HNI – High Net Worth Individuals hence the amounts tend to be smaller and the risk-taking appetite is small too. Venture capitalists are known to take a seat at the board to help the company take off and closely monitor the business growth of the company.

So, here are the Top 10 Most Active Angel Investors In India For Startups

Top 10 Angel Investors You Should Know About

A law graduate of Bangalore University, he has come a long way from being on board of Infosys as Chief Financial Officer to now a Padma Shri Awardee. He is also the co-founder of Akshaya Patra, the world’s largest midday meal program, and works actively with government and regulators on policy recommendations and guidelines.

He has served as the Chairman of the Board of SEBI and is now a Board Member of the National Stock Exchange in India. He has emerged as one of India’s most prolific angel investors. His role as an angel investor has helped start over 10 different funds in venture, growth, and public markets.

He has over 20 companies as part of his portfolio and is still investing and helping India’s business ecosystem grow. You can find him on

Mr. Ratan N Tata was the Chairman of Tata Sons, the holding company of the Tata group, from 1991 till his retirement on December 28, 2012. During his tenure, the group’s revenues grew manifold, totaling over $100 billion in 2011-12.

He is also associated with various organizations in India and overseas. Mr. Tata is on the international advisory boards of Mitsubishi Corporation and JP Morgan Chase.

He also serves on the board of trustees of Cornell University and the University of Southern California. No wonder, an illustrious individual like Ratan Tata felt the need to become an angel investor to help others grow too.

The Government of India honored Mr. Tata with its second-highest civilian award, the Padma Vibhushan, in 2008.

Ratan Tata has a few suggestions for young startups, entrepreneurs, and investors. He believes in the intent of the founders rather than the numbers. He likes to look for a fire in the belly of the entrepreneur to look for new puzzles and solve them. He wants to utilize his personal wealth as an angel investor to fund causes and social enterprises. You should read the story of how he met his business assistant Shantanu Naidu.

He is a notorious serial entrepreneur and helps others like him through angel investing. After founding Freecharge, he tops the list of entrepreneurs with the most number of investments in startups that may turn unicorns in the next few years. His portfolio boasts of 100+ companies. As an angel investor, his portfolio is bound to impress.

With awards and epithets like being featured in Fortune 40 under 40, and Economic Times 40 under his belt, he shows no signs of slowing down. When asked why he does not own a designer car, his response was “ I would rather fuel other’s dreams with the money”.

Now with Credpay which has taken the industry by the storm, this angel investor aims to make a foray into healthcare and education.

Mittal is one of India’s early techpreneurs in India who founded internet companies even before the internet bubble. Under his parent company People Group, he has also produced Bollywood movies. He gained popularity when he appeared as one of the sharks in the reality television series Shark Tank India.

During the first season of Shark Tank India, Mittal has invested ₹5.338 crores in 24 companies. Being an angel investor was the most logical next step in his entrepreneurial journey. This makes him one of the top Indian angel investors.

His angel investing journey has been interesting. In 2011, someone shared about Ola Cabs to Mittal, a tech company that allows booking a taxi from the phone. Initially, Mittal rejected the idea, and one day when he traveled to Delhi and wasn’t able to find a taxi, this clicked with him, and decided to make the investment in Ola Cabs.

Mittal was awarded as Outstanding Serial Entrepreneur and Angel Investor by The Indus Entrepreneurs (TiE) Mumbai in its second year of the “Hall of Fame” 2020 awards. This angel investor has also been named in BusinessWeek’s list of 50 Most Powerful People in India.

This interview of 2011 shows how far ahead of his time did he project today’s India. BBC Interviews Anupam Mittal

He graduated from NMIMS University Mumbai with a B.Tech in Computer Engineering. He worked his way up as a software engineering intern. With the launch of Relevel which matches the market with participants, he is hitting new milestones.

Being a top angel investor in India has helped him build a diverse portfolio and expand his scope of doing and growing businesses apart from the ones he founded and managed.

With his hands in 13 companies Sahil Barua is one of the top Indian angel investors. A graduate of NIT-K in mechanical engineering and an IIM graduate, he has made his way up with the logistics company Delhivery which has now become a Unicorn. He made it to Forbes 30-under 30 list.

His start-up journey started by trying to solve a small problem – logistics in any eCommerce. Barua and his two colleagues thought there was a gap in the business model of the Zomato model because Zomato lacked delivery boys to deliver hyper-locally.

The only thing left was to look for delivery boys, and they found them from a restaurant that was closing down by absorbing those who would be laid off. Such problem-solving capabilities come naturally to this angel investor, as far as we know.

Little that people know is that he is also a philanthropist who shies away from the limelight.

Featuring in Forbes 30 under 30, his story is impressive. Being the youngest self-made entrepreneur in spite of being a school dropout, he inspires so many up-and-coming entrepreneurs. He has won the Thiel fellowship in 2013, post which he launched OYO rooms.

He recently launched an early-stage VC fund, Aroa ventures, to invest in growth-stage businesses in the technology and leisure infrastructure sectors. With investments in Unacademy, Agrowave, and Easy Eat, being an angel investor comes as second nature to him.

An IIT Delhi graduate and an IIM graduate, the litany of his achievements starts as the Vice president of Kotak investment banking in 2006 and starting Bharatpe in 2018, which is currently India’s most-used app for UPI payments. After his Sharktank success, there was some mudslinging between Ashneer Grover and the board of BharatPe post where he started his own Venture Capital Fund.

In Shark Tank, he was the most difficult to impress, and yet, his investment decisions were sound. His major areas of investment as an angel investor are EduTech, FinTech, and payments. Clocking 329 million dollars for at least 22 investments, he is ready to unleash the potential of capital in the market.

This angel investor needs no introduction. “Do Epic Shit” is what he lives, eats, and breathes. He is a YouTuber, storyteller, and educator in addition to being an angel investor. For him, awareness is everything. Check out his website AnkurWarikoo to know more about him.

He has been in the angel networks in India for a long time now, investing since 2015, and has made 20+ investments. Still, his true joy lies in mentoring and coaching founders to get the right fit for their product, attract and retain talent, and emotional management.

Anjali is the Founder and Chairperson of Avaana Capital, supporting future market leaders leveraging tech-led innovation to catalyze climate action and sustainability and deliver exponential returns. She was previously Global Partner and Managing Director with TPG Growth PE, Global Partner with Spencer Stuart and India CEO, and strategy consultant with McKinsey and Co in New York and India.

She is the former non-executive Chairperson of Dena Bank where she successfully led the resolution of the stressed bank.

This angel investor has been appointed to the Expert Advisory Committee for the Start-Up India Seed Fund Scheme announced by the Honorable Prime Minister. She is also on the PM’s NITI Aayog Evolution Review Committee and is closely associated with the NITI Aayog Women Entrepreneurship Platform, Digital Platforms, and Atal Innovation Mission.

She has been an active angel investor and mentor in companies including Delhivery, Nykaa, Safari, Alphavector, Lenskart, UrbanClap, Darwinbox, and Loantap.

She serves as an independent non-executive director on the boards of Piramal Enterprises, Siemens Ltd, Tata Power, Voltas, Kotak AMC, and Delhivery.

She has been on the Advisory Board of the Columbia University Global Centers, South Asia. Previously, she was Chairperson of the India Board of Women’s World Banking, a leading global livelihood-promoting institution, and continues to be an advisor to SEWA.

She has previously served on the public boards of GSK Pharma and Bata. She is a charter member of TiE, served on the managing committee of the Indian Venture Capital Association, mentor to Facebook SheLeadsTech, NITI Aayog’s Atal Innovation Mission. With such achievements, her identity as an angel investor just became more multidimensional.

Listed as one of the “Most Powerful Women in Indian Business” by India’s leading publication, Business Today, and by Fortune India, Anjali is a frequent speaker at forums like Harvard, Stanford, Columbia, IVCA, BSE, and jury member for awards including ET 40 Under 40, Women Ahead, CEO Awards, VC Circle, AIWMI Wealth Awards and others.

She has a BE in Computer Engineering and Masters in International Finance and Business from Columbia University. Anjali is among the top angel investors in India.

WithWith this comprehensive list of these Indian angel investors, it is about time to sit down and work on the idea that has the potential to attract their eyes and brains. When it is all about “Grow big and Fail fast”, do not be deterred.

You will always find the resilience and support system to bounce back. Send this article to your friends, colleagues, and partners and nudge them towards taking the 1st step towards owning their business. Do let us know what you think, we will come back bigger and better in terms of content and curation!