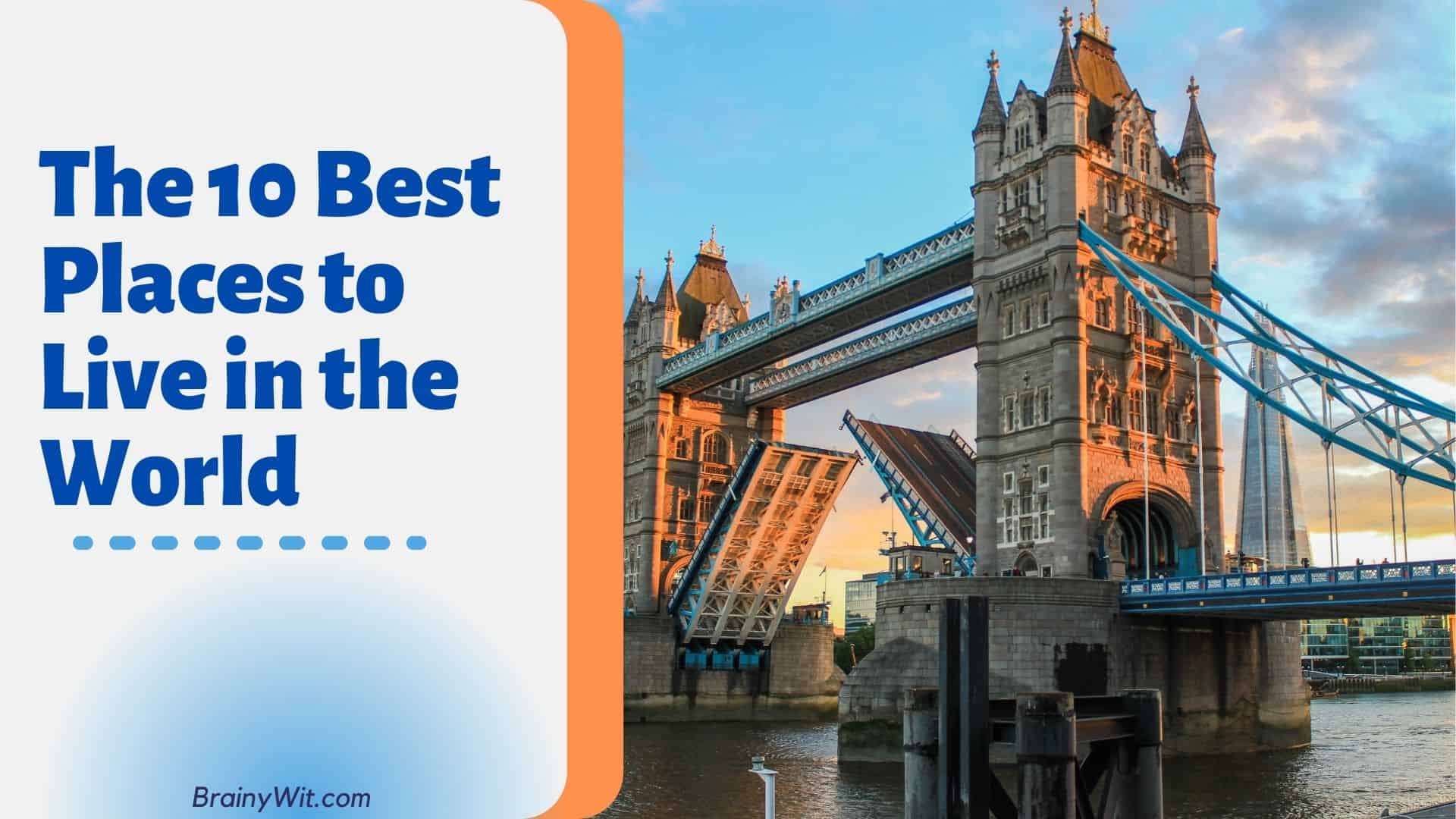 The ranking of the world’s best cities to live in for the year 2022 has just been released by Global Finance. This year’s edition included Covid-19 deaths per thousand for each country, to reflect the new reality we live in.

It was based on 8 different parameters that calculate and compare the quality of life of people living in urban areas, such as economy, culture, population, environment, and so on. The list, which uses data from the Global City Power Index, Johns Hopkins University, Statista, and Macrotrends, aims to provide a comprehensive picture by combining traditional metrics with new ones.

The ranking of the best cities is based on a score that reflects an extensive list of eight distinct factors. Economic strength, research and development, cultural interaction, liveability, the environment, accessibility, GDP per capita (nominal in USD), and COVID-19 deaths per million for the country are the factors that have been taken into consideration.

Each of these factors contributes to a better understanding of the city’s standard of living. Also, each of the metrics is normalized so that they could be properly quantified into a single overall score.

It’s worth noting that the Covid-19 deaths metric is multiplied by three to emphasize how a once-in-a-lifetime pandemic would affect which cities would be the best to live in.

For the tenth year in a row, London was named the best city in the world, but its overall score dropped. The main cause for this was a significant decline in accessibility since London’s strength in international transportation networks was weakened as a result of the novel coronavirus illness (COVID-19).

Despite this, London has improved its liveability and environmental rankings, and its strengths are evenly distributed across all industries. London’s cultural strength, accessibility, and shockingly rapid population expansion set it apart from every other metropolis on the planet.

“London and Partners’ ‘Let’s Do London’ campaign, which promoted business and investment in the capital, was also instrumental in inspiring Britons to enjoy their capital without the typical throngs.”

The city’s major attractions may date back in time but the capital’s shops, pubs, hotels, and restaurants have been evolving.

Tokyo is ranked second after a strong performance against Covid-19. The city improved on last year’s performance, catching up to London and New York, and also demonstrated a strong commitment to research and development in the tech sector, and its extensive public transportation infrastructure provides excellent accessibility.

This increase was aided by the improvement in Workstyle Flexibility, which was a stumbling block for the city last year. The city enhanced its “Trendsetting Potential” in Cultural Interaction as a result of hosting the Olympics, surpassing New York’s score of #3 best city in the world.

Tokyo is ranked first in the world for restaurants, and it is home to some of the best ramen in the world, making it a place worth planning an entire trip around. Don’t worry if the majority of your travel spending is spent on food. There are many inexpensive hotels to choose from in Tokyo.

Despite this, Tokyo has a major flaw: population growth. Tokyo is one of the few cities in the top ten that has had its population fall in the last year.

Surprised Right? Shanghai would not have made the top ten if measured by traditional criteria, as its economic strength, cultural significance, and environmental safety all fall short. Shanghai stands out because of its extremely low Covid-19 death rates which are a result of China’s zero-covid policy and rapid population expansion.

After an evaluation that included aspects such as transportation and infrastructure, energy and lighting, city administration, and technology and urban connection, Juniper Research has placed Shanghai as the world’s number-one smart city for 2022. Shanghai is the Chinese young generation’s dream city to work and live in.

Singapore shares many of the same qualities as the other Asian cities in this year’s top ten. It did reasonably well in terms of economic strength, cultural significance, and environmental safety, and it managed to keep Covid-19 mortality to a minimum per capita.

As per Resonance Consultancy “Singapore’s reinvestment into research, talent, and corporate headquarters recruitment ensure it will be home to a sustainably wealthy citizenry for decades to come. It’s why the city-state continues its ascent among the planet’s most prosperous cities”.

The city, affectionately known as the “Little Red Dot,” received high marks for safety and foreign-born population and earned top marks in our eyes (and stomachs) for its famous hawker stall street food, its garden-like airport terminal, and hospitable hotels.

Melbourne remained in fifth place from the 2020 rating due to its environmental commitment. It not only establishes tight requirements in the pursuit of zero carbon emissions, but it also has a number of organizations pursuing legal avenues to enforce stricter environmental standards. Despite the pandemic, Melbourne had strong population growth.

Melbourne city’s vibe is fueled by a creative & culturally varied community. It is widely acknowledged as having one of the world’s most concentrated food and fashion cultures. The city’s interconnected laneways and bustling inner-city precinct reveal one-of-a-kind boutiques, hidden cafes, and world-class restaurants, while our larger modern department stores and retail complexes strive to entice the most discriminating consumer.

With its cohesive and stable culture, healthcare, education, and world-class infrastructure, Melbourne is ranked as the fifth-best city to live, work, and study in 20222.

A fellow Mate, Sydney comes right behind Melbourne, Australia’s other major city with some of the same advantages: Covid-19 deaths per capita were kept to a minimum thanks to good environmental protection, a reasonably strong economy that is doing well, and the Australian government’s lockdowns.

Sydney, with its location directly on the ocean and some of the world’s most stunning swimming sites and beaches, is clearly rated high in this list’s outdoor category. According to Resonance Consultancy, those large open spaces “likely helped the city withstand the pandemic during its first year.” “Some green places had twice as many visitors as normal.”

Since it is the largest economy in the country, it also provides the most profitable chances. That is why entrepreneurs and start-up companies rush to the city to collaborate with some of the world’s brightest minds and most promising businesses.

The fashion capital of the world comes at seventh place in the list of the world’s best cities to live in 2022. Paris has recently been through a lot. The Covid-19 death rate in France has been greater than the global average, and population growth in Paris has been low. Traditional measurements like cultural significance and liveability, on the other hand, favor Paris.

According to Resonance Consultancy “Parisians streamed out of their close quarters almost as soon as the outbreak began onto the historic Rue de Rivoli, the famed thoroughfare that intersects the heart of the capital, when it became off-limits to cars”.

“The Champs-Élysées is next on the city’s agenda, with plans to transform the avenue into a vast garden over the next decade, with automobile access reduced by half and millions of euros invested in pedestrian-friendly amenities.”

It’s only getting better as Paris prepares for the 2024 Olympics. In the last year alone, improved infrastructure and a handful of new hotels have added to a city we admire for its world-class art, shopping, and international cuisine.

Given its ranking of 22nd in 2020, Beijing’s ascension to the top ten greatest cities to live in is surprising. Beijing has a low liveability rating (although this is increasing), and its high levels of pollution result in a low environmental safety rating. Despite this, Beijing’s ranking was boosted by China’s low Covid-19 death rate and the city’s population growth of about 2% in the previous year. Beijing may have problems, but it is still developing and rising.

Beijing has conserved many parts of traditional Chinese culture, such as Beijing opera, kung fu, tea culture, paper cutting, Chinese calligraphy, and sugar painting, as an old capital. If you’re interested in learning more about these topics, Beijing is the place to go.

In comparison to other major cities throughout the world, this is a relatively safe location. The cost of life in China is substantially lower than in the West, from restaurant cuisine to groceries, transportation to a nice haircut everything can be found at a reasonable price.

The opening of Beijing Universal Studios in 2021 should assist the city’s current ranking of 75 Attractions to improve in the following years.

New York came at a shockingly 9th position in the list of the world’s top ten 10 cities to live in this year but maintained to keep up the top 10 ratings. Due to its strong economy, cultural relevance, and research and development, New York City is the only American city on this year’s list. The extremely high Covid-19 death rate in the United States, as well as the city’s growing cost of living, and notable rents, are driving it down in 2022.

“The City” consistently ranks for its constantly improving culture, as evidenced by the recent renovation of the Museum of Modern Art and the Fotografiska photography museum that opened in Manhattan’s Flatiron District. Little Island, a suspended arts-and-culture park in the Hudson River, has been added to the list of Sights and Landmarks. And, when Broadway begins to reopen this month, we anticipate a surge of visitors.

However, with infrastructure enhancements, a busy cultural calendar, world-class hotels, a new outdoor eating scene, multicultural neighborhoods to explore, and many more dynamic options on exhibit this year across all five boroughs, New York City is resurging.

Before we start, we are with you. YES!!! Amsterdam is usually a fan favorite when asked about the best cities to live in, PERIOD. This “Venice of the North” could easily be at the top spot any day on any list given the rich culture, art, freedom, and beautiful landscapes the city has to offer.

The Dutch canal capital wraps up the list of the “top 10 world’s best cities to live in 2022”. Despite the fact that Amsterdam has dropped in the rankings (6th last year), it still ranks fifth in terms of happiness (7.5/10).

Amsterdam also boasts the sixth-lowest obesity rate in Europe, at 20.4 percent of the population, after only Geneva, Zurich, and Milan. Amsterdam, with a life expectancy of nearly 82 years, is another wonderful city to relocate to if you want to live a healthy and happy life.

Amsterdam has a lower cost of living than its European counterparts, as well as a diverse range of transit options.

The city envisions banning all gas and diesel cars and by 2030. WOW!! RIGHT.

Population increase combined with low Covid-19 death rates is the main reason why several Asian cities have risen in the ranks since 2020. Hong Kong (11), Dubai (12), Seoul (13), and Bangkok (22) all had rapid population increases while limiting Covid-19 mortality.

Another key aspect of this year’s ranking was the enormous difference in population growth among the world’s biggest cities.

We hope you like our compilation of the world’s best cities to live in. We were surprised to see some names we didn’t expect, we guess many of you must have felt the same. Which is the best city to live in according to you? Comment below.

STAY Tuned for more exciting and eye-opening facts. Suggestions are always open, especially the weird ones.