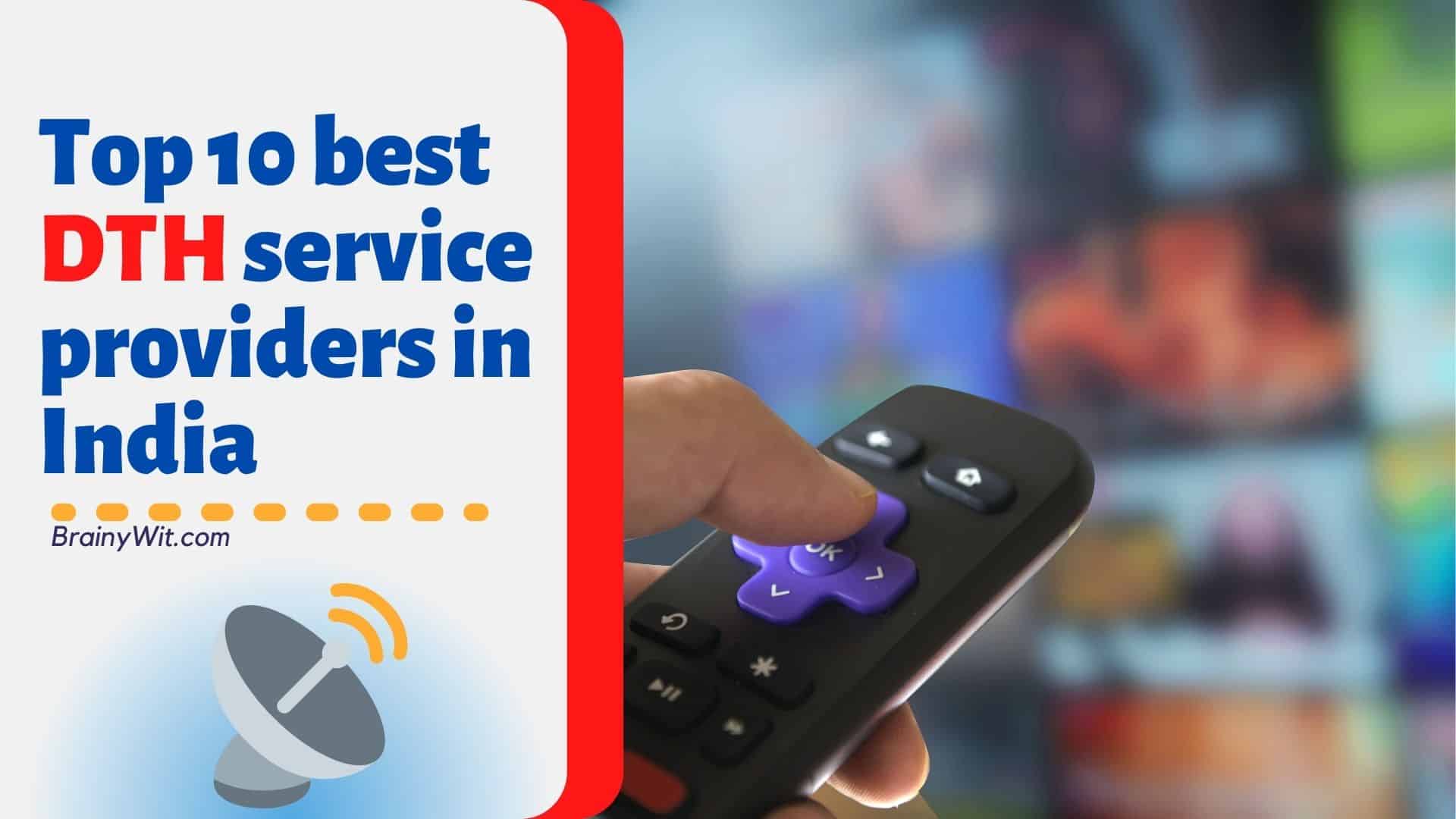 We know Indians have been very fond of using the DTH service, marking the first place in the world for using this service. So, to all those DTH users, this is a complete guide on How to choose the best DTH in India according to your requirements and preferences.

Please continue to read until the very end so that you will be well capable of choosing the best DTH (Direct-To-Home) in India suitable for your needs.

A Direct-to-home or DTH service is a television broadcasting service provided to the end customers who are us, the public.

The aim to provide this service is to serve the people with the maximum variety of information about events or incidents happening all around the world through numerous channels and that too at a minimum cost so the information reaches every home possible.

Now, that one is capable of this service, why not customize it according to their interests and of course their budget. This facility is the main ingredient of the purpose of these DTH services.

Without wasting much time, let us move to the solution of our problem. How to choose the best DTH service provider in India as per our preferences?

Although this DTH may not be the most popular among HD channel lovers or the variety channel pack lovers, it is at the top of the list at it provides free service, and what is better than the deal which constitutes all the necessary basic channels including news, some daily-soap programs or regional channels with no monthly subscription. (yes, you have to pay only for the set-up for receiving this DTH service.)

The whole DD Free Dish set-up comprising the Dish Antenna, Set-top Box(STB), and the Remote, is only a one-time investment and anyone can buy it easily from the local market or online as well for just a nominal cost.

This service does not need any local cable operator to be accessed, and rather the channels are telecast directly through the satellites.

The set-top box required for receiving this service will be a Free to Air(FTA) type of set-top box(STB) and not any other type of STB will be required.

However, to view the HD channel in the DD Free Dish, you may require a MPEG-4/HD set-top box, otherwise, for receiving encrypted TV channels, you will require iCAS SD set-top box authorized by Doordarshan, but it does not support the HD channel.

It depends on the choice of the user. The set-top boxes’ price ranges from ₹500-1500/-, depending upon the type and purpose. Being a free service makes DD Bharti one of the best DTH in India.

With so many free subscriptions and the cheapest set-top box in the category, DD FREE DISH is undoubtedly the best DTH in India.

Below are some parameters on which you can easily decide whether this is the service you want in your home. You can also go on to their official website to know more about DD free dish:-

The second best DTH in India which is on our list is the Jio DTH service by Reliance Group and the reasons behind this are the facilities and offers they provide with this. Who does not want a High-Speed Broadband Service along with with the DTH service and that too with Full HD channels?

As we all know, Reliance always launches any of its services or product with some BIG OFFER creating a big stir in the market. Like in this case, the company has launched a “Jio Welcome Offer” for first-time users of this service which includes 3 months free trial.

You may be getting worried that this service does not yet surround you unlike the other old and prominent DTH services but do not be worried if it is not yet, it will be in a couple of months or even a little more.

It is said that Jio DTH has been started in some metropolitan cities and that too not on a large scale. Although, the bookings for the same have been started. But, you can always have the patience for something special and advantageous.

The difference between this DTH service and the other DTH services available in the market is that to avail of the Jio DTH services you do not need an antenna for receiving the signals, rather applying to a broadband connection is all you will need which includes the router and the set-top box.

Hence, you get both the facilities of high-speed internet of around 1GBps(1000 MBps) as well as watching TV with high-definition channels, supporting online streaming in 4k HD quality. The system will support HD gaming quality also.

The prices and plans are not yet confirmed in the market but there have been some announcements by the company on the same.

Here are the expected features of Jio DTH:

(Note:- These facts are not yet officially announced, rather are just expected.)

Tata Play formerly or famously called as TATA Sky is one of the best DTH brands in India and has also been titled the No. 1 DTH provider in 2019 based on certain facts. It was launched in 2006 jointly by Tata Sons and Twenty-First Century Fox.

After more than 15 years in business, Tata Sky has announced that it will change its name to Tata Play. The company, which claims to have millions of clients, asserts that its business now includes fiber-to-home broadband and Binge services in addition to DTH. The company’s expanded variety of products and services is reflected in the new name. Tata Sky now has 23 million active subscribers and 23 million connections.

The company has also announced that it would add Netflix support, which will be a huge relief for its clients. Users won’t have to look for alternative ways to stream Netflix anymore, as the popular OTT program will be available starting tomorrow. Most major video streaming apps, including Amazon Prime, Disney+ Hotstar, Voot, and others, are currently supported by the service.

Being the first to introduce the facility of customization of channels in the form of ‘pick and pay’ packs according to the user’s interests and to provide its customers with 4K set-top boxes, it has gained a commendable customer base by providing these valuable facilities to the public.

Tata Sky also gained popularity and became the current best DTH in India due to some of its other amazing and much-needed features such as Personal Video Recorder(PVR), having distinctive features so that you can pause record, and also rewind your Live TV screen, remote record facility, and more.

The HD Tata Sky set-top box price – is around ₹1,499/- (the new customers of Tata Sky DTH service have to only purchase the HD set-top box)

The following table describes some main points which you should consider in this process:-

Airtel Digital TV was started in October 2008 by Bharti Airtel. It is one of the leading brands in the DTH service providers.

This service also supports the customization of channels depending on the interests of the customer and so the price value also changes accordingly.

The types of packs including the number of channels provided vary according to the regions or states.

The set-top box supports high-quality videos along with a good quality surrounding (Dolby surround sound) sound and not to forget the video recording facility.

The parent company of D2H (which we will discuss further) and Zing Digital which is a regional content telecasting brand, Dish TV was started by the Zee Group in October 2003. Although, it is now been operated combinedly by the Zee Group and the Videocon group.

Being the oldest in the field, Dish TV has grown a huge no. customer base and also due to the variety in set-top boxes like DISH HD + with Recorder, Digital Set-Top-Box with Recorder, etc., to improve the streaming quality for the viewers.

It has launched a d2h Stream set-top box used to upgrade your TV to a smart one. There are more such types of set-top boxes offered by d2h like a Digital set-top box, Digital HD set-top box, and HD RF set-top box (with a magic stick variant also).

The price of the digital set-top box starts from ₹1,499/- and goes up to ₹6,050/- depending upon the set-top box quality type and the subscription benefits along with it.

Starting in December 2007, Sun Direct is the DTH service provider giving more emphasis on the interests of the southern part of the country, but also covering a large variety of regional languages like Kannad, Tamilian, Telugu, Gujarati, Punjabi, and Bengali or so.

Zing Digital is a provider of Direct-to-Home television. It is a Dish TV India company that began in January 2015 to provide access to regional language channel packs. The service is currently available in Kerala, West Bengal, and Odisha.

Using the language button, you may personalize your favorite channels and enter the entertainment zone created just for you!

What distinguishes Zing Digital from the competition is our commitment to provide you with a comprehensive TV viewing experience that includes maximum regional entertainment, ensuring that you will never run out of options with us.

Independent Dish TV, formerly known as Reliance Big TV, was a DTH television provider in India. Founded in 2008, this was also considered one of Reliance Communications’ subsidiaries until 2018.

This was previously known as Reliance Big TV, and it quickly grew to 1 million customers in just three months. This was primarily due to the lack of competition in the market from other service providers.

Reliance Digital TV was the name given to this service once it was renamed. Independent Dish TV also introduced a pre-booking DTH service in March 2018. They placed pre-orders and received payments from clients, but the service connections were not installed.

You can obtain the DEN Cable TV Connection by visiting the official website www.dennetworks.com or by contacting your local cable operator. Provide them with your name, phone number, and email address.

The customer gets the option of selecting their chosen television station. According to the amended TRAI Regulations, for the first 100 free-to-air minutes, a fee of Rs 130 + GST is required (FTA). Following that, for every 25 channels, the Customer must pay Rs 20 as a network charge (paid and free).

Your preference for a Set-Top Box determines the PLAN and STB costs which ranges between 800 to 1999.

Here is a detailed guide for you to choose the best DTH in India, amongst all these options, and I hope you will have been now able to decide on your own what type is the best for you.

All the basic facts and details have been provided in this article for your ease in this mind-wrecking process. So, enjoy watching TV with your own-chosen DTH provider and never complain!

Hope you liked it and had something out of it. Thanks!

Note:- The facts stated above have been taken from different sources and do not comply with being 100% accurate, though the discussions above were reliable. It is possible that there may be some changes in the facts or details listed above.

Hi, I am Shivam, the founder of BrainyWit and a Digital Marketing Consultant who is passionate about creating value-based marketing strategies for ambitious & progressive businesses. A seasoned marketer with expertise in Search Engine Optimization, Search Engine Marketing, and WordPress Website Development.