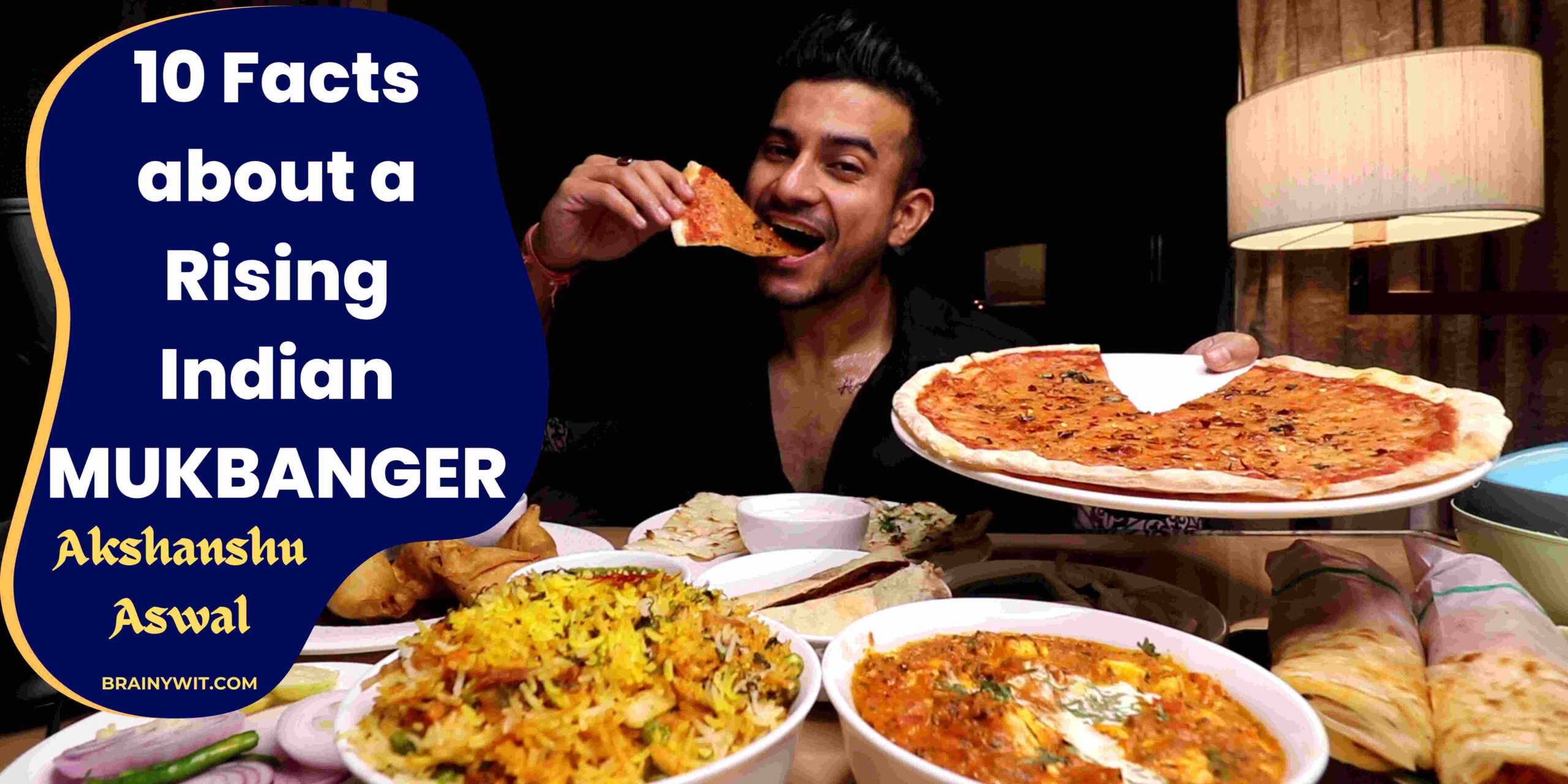 Ever wondered about the life of a Mukbanger? Let’s find out.

Mukbang YouTubers in India are gaining in popularity as binge-eating entertainers are downing calories like water.

Mukbang translates to “Eating Broadcast” in Korean. It’s a live-streamed eating program in which the host eats huge amounts of food. In 2010, it gained a lot of traction on a Korean network called AfreecaTV before moving to YouTube.

Mukbang, on the other hand, began to gain popularity in Korea in late 2014, and by 2015, it had become a global craze. “No one likes to eat alone.” We Get It. However, watching others eat alone (generally) is turning into a Global Trend.

We are still evaluating whether it gives humans a feeling of contentment, accomplishment, or meaning in life. What pleasure do people get from watching stuffed mouths? One thing we can totally vouch for is the feeling of hunger and drool.

ASMR – The Perfect Recipe for Mukbang

We guess Face Stuffing was not enough so the squishy eating sounds were added to give panache to Mukbang.

The majority of Mukbang YouTubers are aware of the ASMR potential of their content. The term “ASMR” stands for “autonomous sensory meridian response.”

The majority of ASMR is triggered by pleasant noises like whispering or tapping. Mukbang, on the other hand, provides a unique ASMR experience with the sounds of slurping, crunching, chomping, chewing, and other food-related sounds.

Many Mukbang YouTubers do an excellent job of amplifying sounds that can trigger tingles all over your body. Others find it very calming, and it can even assist them in falling asleep.

Today, ASMR is the considered standard for Mukbang YouTubers.

Akshanshu Aswal is a known name in the world of Indian Mukbang and is also considered one of the best Mukbanger in India when it comes to content quality. What makes him special? What is his journey? How did he enter the world of Mukbang?

If you are hearing his name for the first time, you need to check out his YouTube channel right now Akshanshu Aswal.

We had the absolute pleasure of getting to know him better and how he earned his fame in the world of Mukbang.

The early life of this Indian Mukbang big wig

Akshanshu Aswal is Journalism and a Mass Comm graduate and was working as an assistant cinematographer in Mumbai for 3 years. When he started as a Mukbanger, it was never his aim to be known as such.

His penchant for vlogging armed with his camera skills, and filmmaking knowledge nudged him towards exploring the free world i.e. The internet, specifically YouTube. He wanted to be a daily lifestyle vlogger, thanks to Casey Neistat but life had other plans for this Mukbanger.

Working in Mumbai for different production houses propelled him to learn more. Then, the world stood still as Covid 19 hit.

Covid 19 and journey to becoming a Mukbanger

The lockdown proved to be a boon for him. Daily vlogging was difficult owing to restrictions so the journey inwards happened. Akshanshu decided to give his body a chance to become ripped. From dad bod to a 6 pack (mind you, not beer), he focused on vlogging about his regime.

It was his elder brother who introduced him to the world of Mukbang. What’s more, he said that it would be possible to eat all that you want and still look shredded. This was an interesting thought for Akshanshu.

All hands on the deck, he took a leap of faith because he is a foodie, and knowing other Mukbangers, he knew he could do it.

Balancing Mukbang and his physique

The biggest challenge was to stay fit while gorging on all that food. So, he started incorporating the “Calorie in Calorie Out” method to keep himself disease-free and fit. His workouts became intense while his food journey took off.

This is the reason he follows “OMAD – One Meal A Day” to maintain his gut health and give his body time off to digest all that grease and junk. On regular days, he stays on a calorie deficit and sticks to essentials. 10k steps, no matter what he is doing, and home workouts are his go-to-fitness routine

Why do people love Mukbang videos?

The reason he gives for the love of Mukbang videos is the satisfaction of cravings, especially for people who live alone, away from their homes, and are just cooking for themselves.

The ASMR factor adds to the oomph as the burger hits differently when you hear somebody eat, biting through that lettuce to the juicy patty and the soft side of the bread.

Tips to start a Mukbang channel

Visuals are everything and Akshanshu swears by it. If the layout of the food does not make you salivate, you are doing it wrong. So, the layout should be visible and let the food be the star, not you.

Also, he thinks the expressions that your face shows on camera while eating that food determines the worthiness of the video. If you are enjoying it to the fullest, your expression should and will be visible reflecting that happiness you are experiencing while eating that slice of pizza.

Once you are full of force-feeding, the audience can pick up on that and may not enjoy watching that video anymore. So, sticking to the basics is a must, and also respecting your body is the default.

Also, his setup is minimal. A key light, an external mic that can record the audio well, his Canon 80D, and a LED logo that features his channel are all that he requires to shoot those mouthwatering Mukbang videos.

To eat food that you don’t like as a Mukbanger

On this, he confesses that not all cuisines tingle his taste buds like home food does, or Indian food for that matter.

To which, he says that the idea is to not finish the food but to keep the conversation going. He will keep smiling and talking about the food. Also, a very important point to note is that he never wastes any food involved in the shooting process.

Is social acceptance easy as a Mukbanger?

He compares this journey to that of the gaming community in India. When it started, critique flew in from all quarters and on top of that live streaming, your games were simply not done.

Today these naysayers have been proved wrong. The gaming community is as vibrant and colorful as it is around the world. So is the case with Mukbang. So yes, viewers want to know how can a Mukbanger eat and still be fit and how creative can they get about their cravings.

Raising a toast to his favorite Mukbangers

Ben Deen and Vartan Fresh are his favorites and for ASMR, his go-to are Zach Choi and Eat with Boki. He also likes competitive eating and his favorites are Beard meets food and Matt Stonie.

Funny anecdotes on his journey to being a Mukbanger

Akshanshu lives in a busy neighborhood and one of his biggest pet peeves is the fact that it is never quiet. Barking dogs, children screaming and even grocers hawking loudly are picked up very well by his microphone.

So, neighborhood gossip galore and daily reminders of life outside of the Mukbang world are what keeps Akshanshu on the editing table, laughing his heart away as he listens to these titbits.

In the end, “Life is short so are your cravings” should be the mantra for any Mukbanger and Akshanshu is a living example of it, making the most out of these two years of Covid-induced glum.

His journey is exciting and fulfilling at the same time where food desires are not being killed at the altar of fitness. This interview left us wanting more and we hope to interact with him soon!

From time to time I’m capable of donating some amount of money and food to one NGO in Dehradun, I try my best to support a few families that are financially struggling and I firmly believe that if I was working in some other profession it would have been difficult to do these things.

This perspective towards life certainly makes Akshanshu Aswal one of the best Mukbanger in India.

Send this article to your friends, family, and loved ones who binge-watch Mukbang videos and maybe want to start their own YouTube channel someday. We hope to always bring you the best of content, curated just to your liking.

How do mukbangers eat so much?

Most Mukbangers generally reveal that they follow a strict diet in order to eat huge amounts of calories which can range up to 4000 calories. We have also seen Mukbangers follow the OMAD – One meal a day diet.

How can mukbangers eat so much?

Mukbangers follow a strict diet plan and maintain their calorie count. Mukbangers generally show a small part of their video and we can’t assure that they consume the whole meal. Some rumors also say that Mukbangers regurgitate after eating the huge piles of food to save their stomach.

Why mukbang is popular?

In our opinion, COVID 19 and the global pandemic played a huge part in giving a boost to Mukbang channels on YouTube. Mukbang gave a feeling of comfort to many people who used to eat their daily meals alone while stuck in the lockdown.

Who is Nikocado Avocado?

Nicholas Perry, a.k.a. Nikocado Avocado is a famous Mukbanger who revealed that his mukbang binge eating has taken a toll on his health, causing concerns such as erectile dysfunction, diarrhea, and weight gain.

Do mukbangers have health problems?