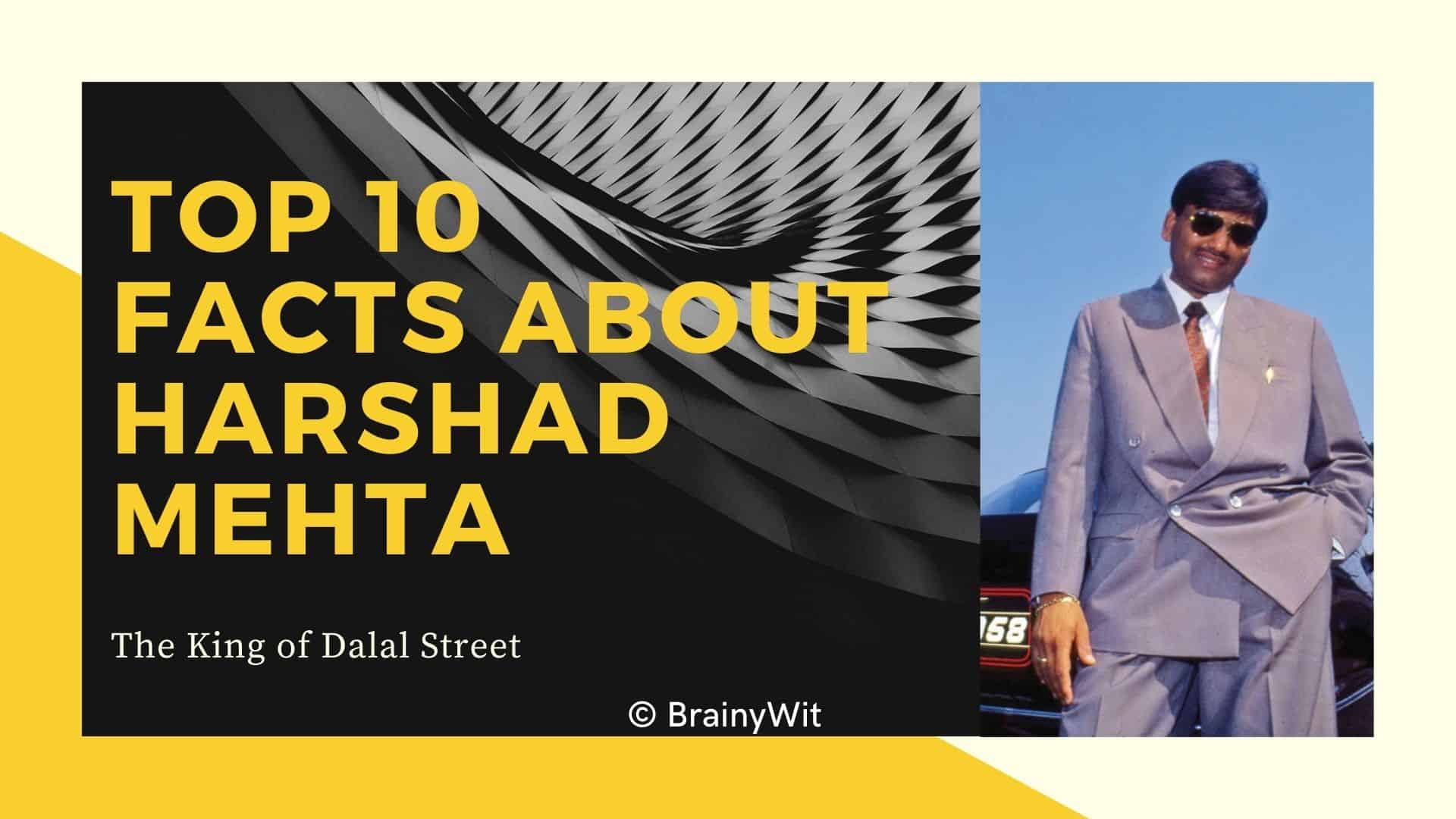 The biggest stock market scam in India occurred in 1992 when Harshad Mehta, widely known as the Big Bull of Dalal Street or the King of Dalal street defrauded the entire country of Rs 4,000 crore.

Harshad Mehta committed fraud using the Ready Forward Deal(RF Deal) and forged bank receipts. Because banks were required to invest in government assets, if they ran out of cash, they would sell their bonds or securities to other banks to get capital.

After a while, they would pay interest with capital to reclaim their bond. Because Mehta was a well-known broker at the time, he would function as a go-between for banks looking to sell or acquire securities. He took advantage of this to pull off one of the largest con jobs ever.

Harshad Mehta was born on 29 July 1954 in Paneli Moti, Rajkot, and grew up in a Gujarati Jain family. Harshad grew up in Mumbai’s Kandivali neighborhood, where his father, Shantilal Mehta, had a small textile shop.

Later, the Harshad Mehta family relocated to Raipur, Chhattisgarh, where Harshad completed his education before returning to Bombay (now Mumbai) for his degree in 1973.

Harshad had odd jobs for the next eight years after graduating in 1976. He worked as a cement contractor, a hosiery salesman, a diamond sorter, an insurance clerk, and a variety of other sales-related occupations. Meanwhile, Harshad became interested in the stock market while working as an insurance agent in the Bombay office of New India Assurance Company Limited (NIACL).

In 1981, he left NIACL and began working as a jobber (a person who delivers clients to stock market brokers) for Prasann Pranjivandas, a stockbroker whom he regarded as his guru in the stock market sector.

His lifestyle featured a 15,000 square foot sea-facing apartment in Worli, Mumbai, this penthouse was created by interconnecting nine flats on the third and fourth floor of the 14-storeyed Madhuli Cooperative Housing Society with a mini-golf course and swimming pool on the premises.

He also had a collection of expensive cars, including a Toyota Lexus worth Rs. 40 lakh, which he used to travel in.

He made investments in Apollo Tyres, Reliance, Tata Iron and Steel, BPL, Videocon, and ACC, among others. In just three months, he manipulated the share price of ACC Cement, taking it from Rs 200 to Rs 9000 (a 4500 percent increase).

Jyoti Mehta is Harshad Mehta’s wife, and she is well-known on the internet because of her husband. Jyoti came from a Gujarati (Jain) household as well. Together they have a son, Aatur Harshad Mehta.

Jyoti Mehta has been a part of Harshad Mehta’s life since the beginning of his career. She used to be with him when he was a stockbroker, and they married when they were both very young. She was a housewife or homemaker after her marriage to Harshad Mehta.

Jyoti became embroiled in a series of court fights after Harshad Mehta was arrested. She was attempting to obtain the money that her husband had the legal right to.

After 27 years, the Tax Appellate Tribunal overturned practically the whole tax claim of about 2000 crore against Harshad, his wife, Jyoti, and his brother, Ashwin Mehta.

Harshad owes nearly six crore rupees to stockbroker Kishore Janani and Federal Bank since 1992. In the same year, Jyoti won a case against them. Because she was his sole beneficiary, she was entitled to the entire sum plus 18 percent interest.

Harshad Mehta’s Son, Aatur Harshad Mehta is the only son of a stockbroker, investor, and businessman Harshad Mehta (Harshad Shantilal Mehta). Harshad Mehta became well-known as a market manipulator after his Indian securities scandal in 1992.

Aatur was born in the early 1990s, but his exact age is unknown. Aatur Mehta is estimated to be between 25 and 35 years old (as of 2022). Aatur and his mother Jyoti, according to certain media reports, are currently residing in the United States.

There is no information on Aatur’s marital life available. According to sources, Harshad Mehta’s son Atur is a stockbroker and entrepreneur. He primarily invests in textile industries as a broker.

He also owns and operates a small business. Atur Mehta’s net worth is yet to be revealed. We’ll try to track down information about his career and get back to you as soon as possible.

Harshad’s life was going very well until Sucheta Dalal, a writer, became interested in his extravagant lifestyle. She also looked into how Harshad Mehta was able to amass a fortune of Rs 1000 crores in such a short period of time.

Finally, on April 23, 1992, Sucheta Dalal published a story in The Times of India detailing how Harshad defrauded the State Bank of India of Rs 500 crores. Together with Debashis Basu, Sucheta Dalal and Debashis Basu released “The Scam: Who Won, Who Lost, Who Got Away” in 1993. The fraud is the basis for the novel.

In November 1992, the CBI arrested Harshad Mehta and his brothers, Sudhir and Ashwin, who was also involved in the scam. Harshad Mehta was charged with 72 criminal offenses by the CBI, and over 600 criminal action cases were filed against him by various banks and institutions.

Harshad obtained the services of renowned experienced lawyer Ram Jethmalani to review his case, and after three months in jail, the High Court of Bombay granted him bail.

Finally, Harshad Mehta was sentenced to 5 years in prison by the Bombay High Court in September 1999, along with three others, in the Rs 380.97 million Maruti Udyog Ltd fraud case.

When Harshad Mehta complained of chest problems while serving his sentence in Thane Prison, he was transported to Thane Civil Hospital. Harshad Mehta died at the hospital on December 31, 2001, from a cardiac condition.

Banks are required to furnish bank receipts to customers who purchase securities when they are sold. These bank receipts serve as evidence that the transaction occurred.

Harshad Mehta spent that money in the stock market, causing certain companies’ stock prices to skyrocket. Harshad Mehta would sell the stock when it was at its height, reaping big profits.

Harshad Mehta would repay the bank’s money and take back his fraudulent bank receipts once the cycle was completed. For the fraud he committed, Harshad Mehta was hit with over 600 civil lawsuits and 70 criminal charges.

Where is Harshad Mehta’s Family now?

According to ScoopWhoop, the income tax tribunal finally dismissed practically the whole tax demand in February 2019. It was valued at a total of 2.014 crores.

In the same year, Jyoti Mehta won a case against Federal Bank and stockbroker Kishore Janani. Harshad Mehta allegedly owed them 6 crores since 1992. Jyoti was given the full sum, plus 18 percent interest.

She publicly holds five equities with a net value of over Rs. 2.3 crore, according to her corporate shareholdings disclosed for June 30, 2021. According to reports, Jyoti and her son, Aatur, have relocated to the United States of America from Mumbai, India. They’re simply attempting to start over, away from the media.

Harshad’s brother, Ashwin Mehta, studied law in his mid-fifties. He is currently practicing in both the Mumbai High Court and the Supreme Court. As of 2022, Ashwin Mehta’s net worth is predicted to be $4 million. He is a well-educated individual. He is highly sharp, according to sources, and he used to handle all of his late brother Harshad Mehta’s belongings.

1. The Harshad Mehta Scam is the biggest stock market fraud in India to date. The scam is estimated to be worth around 4,000 crores (the current value being over 24,000 crores). This fraud revealed several flaws in the Indian banking system.

Although Harshad was able to shift enormous quantities of money from the banking system to the stock market by exploiting system flaws. Foreign banks and their preferred brokers, on the other hand, had been tinkering with the system long before Harshad discovered the flaws.

2. Harshad Mehta was born on July 29, 1965, in Rajkot, Gujarat, to a Gujrati family. He graduated from Lajpatrai College in Mumbai with a bachelor’s degree in commerce (BCom).

3. Harshad was a cricket fanatic, but only a few people knew. In his spare time, he enjoys playing and watching cricket. Harshad was also a member of his school’s (Holy Cross Baron Bazar School) Raipur cricket team.

4. Prasann Pranjivandas, a Broker was considered by Harshad Mehta to be his ‘Guru’ in the stock market.

5. Harshad Mehta began his career as a broker at the Bombay Stock Exchange (BSE) in 1984. His company, “GrowMore Research and Asset Management,” was founded by him.

6. Harshad began investing in the stock market in the early 1980s, but there was no such thing as long-term investing at the time. Much of what passed for the study was just trading based on information only a few people had access to. This was a standard technique at the time, and it was how most big brokers made their money.

7. Harshad’s bullish initiatives and massive investment in the ACC share skyrocketed its price from 200 to 9,000 rupees in just three months. Harshad was also able to persuade financial institutions to invest in the stocks in which he was Bullish and heavily invested.

Harshad may have had some good ideas, but it’s impossible to deny that the institutions’ backing for him was based more on his clout in Delhi’s halls of power and the need for quick riches than on his stock-picking abilities.

8. Harshad had an extravagant lifestyle and person, he purchased a 15,000-square-foot mansion in Worli, Mumbai, and owned a Lexus Starlet, Toyota Corolla, and Toyota Sera cars that were previously only accessible to the wealthiest. With 26 crores in taxes paid in advance, he was Mumbai’s largest taxpayer.

Harshad Mehta had become so well-known in the stock market by the 1990s that he was dubbed the “Amitabh Bachchan of the Stock Market.” The terms ‘The Big Bull’ and ‘Raging Bull’ were frequently used to describe him.

9. Several lawsuits against him are still pending. A total of 28 cases were filed against him. The Securities and Exchange Board of India (SEBI), India’s market regulator, had barred him from stock market-related activities for the rest of his life for his scam & gimmicks.

10. Sucheta Dalal and Debashish Basu go into great depth about Mehta’s life and his 1992 scam in their book The Scam: From Harshad Mehta to Ketan Parekh. The book was adapted in a 2020 Netflix Blockbuster Series – The Scam 1992.

Again in 2021, Abhishek Bacchan starred in the movie ‘The Big Bull’. The plot was again based on the book by Sucheta Dalal and Debashish Basu and the stock market scam that occurred in India in 1992.

So, these were some facts about Harshad Mehta the King of Dalal street.

The series “Scam 1992: The Harshad Mehta Story” is inspired by the Indian stock market meltdown of 1992. Harshad Mehta’s life is the subject of the film. A-list actors Jai Upadhyay, Anjali Barot, Hemant Kher, Pratik Gandhi, and others star in the series.

It is based on the novel “The Scam: Who Won, Who Lost, and Who Got Away.” Debashish Basu and Sucheta Dalal, both journalists, wrote this book. You can watch the series to learn more about how Harshad Mehta’s family’s story ended.

Yes, it is. The Big bull story is based on a 1992 Indian stock market scam.

When did Harshad Mehta die?

Harshad Shantilal Mehta died from a sudden heart attack on 31 December 2001 at the age of 47 in Thane, Maharashtra, India.

Who revealed the Harshad Mehta scam?