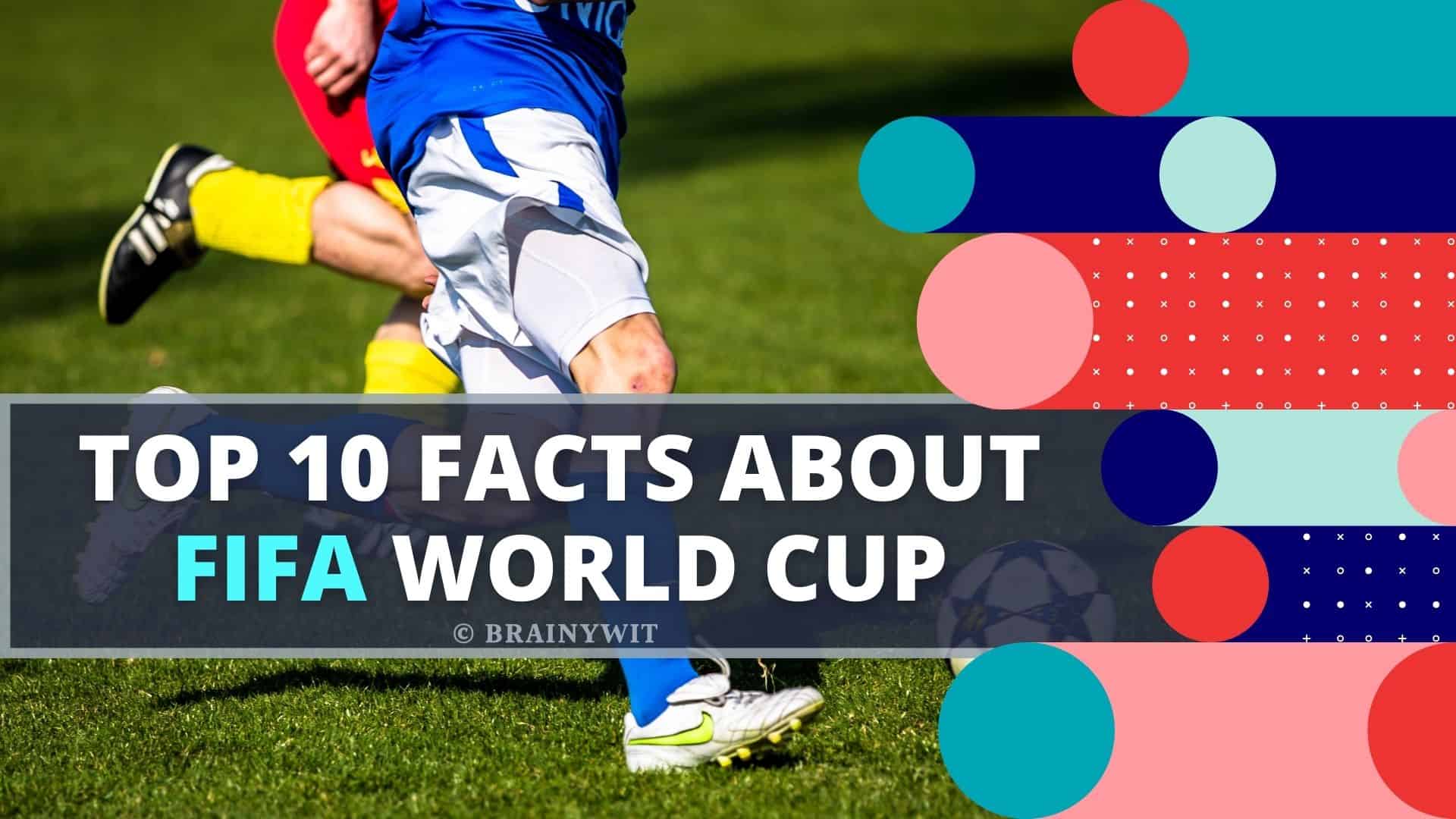 The FIFA World Cup 2022, Football’s most renowned championship, is ready to kick off. The clock is ticking while billions of Football Fanatics are eagerly waiting to wave their favorite countries’ flags or even better, be a part of the Mexican Wave in the crowd.

FIFA world cup 2022 venue Qatar, arguably the most famous country in the Middle East, is preparing for a month-long carnival when the tournament begins in the winter of 2022.

So, are you curious to know what makes the next FIFA 2022 World Cup one of the most unique in football history? Let’s take a closer look at some of the most fascinating facts about the FIFA World Cup 2022 that stand out.

Ready to get Nutmegged?

Since the 2010 bid, the tagline ‘Expect Amazing’ has been teasing the world. It promises to be a once-in-a-lifetime tournament. It’s intended to pique our interest and entice us to follow the country’s road to the 2022 World Cup.

When Qatar was awarded the hosting rights for the FIFA World Cup in 2022, the world’s attention was drawn to the country.

The Branding for the FIFA World Cup 2022 says:

The 2022 World Cup in Qatar will be a celebration of football and its power to bring people together. It will take place in a country that is proud of its history and culture. It will be a display of modernism, creativity, ambition, and achievement that will rocket their modest country into the world’s consciousness.

On September 3, 2019, at 20:22 P.M., the official 2022 World Cup emblem was unveiled. Many of Doha’s renowned sites, including Doha Tower, Al Zubarah Fort, the National Archive Museum at Souq Waqif, and Katara Cultural Village Amphitheatre, were projected with an image of the symbol for the nation to view.

From London to Moscow, Baghdad to Madrid, it was projected simultaneously onto prominent sites in 24 nations around the world.

It’s an evident homage to local and regional culture for some. Others believe it deviates too far from traditional emblem designs. Whatever your point of view, Qatar’s World Cup logo is distinctive and rich in symbolism.

The symbol is shaped like the World Cup winner’s trophy, but it has been redesigned to look like a type of woollen shawl. In the winter, Arab and Gulf nationals wear the ‘Shal’ which is a wonderful reference to the winter season in which the games would be held.

The design’s sweeping curves are reminiscent of the desert landscapes found in the country’s west and south.

The logo’s unbroken loop – which follows the outline of the number eight, which represents the eight stadiums that will host the matches – is embellished with a variety of different markings.

The motifs are comparable to those found on traditional shawls, men’s headgear, and majlis sedu pillows (Majlis refers to a space, such as a sitting room, where guests are received and entertained).

They also include a geometric, Islamic art style football as a nod to the game, as well as Arabic script diacritic dots.

The design, which is inspired by the Asia region and culture complements the logo by combining classic Arabic calligraphy with a new, contemporary font to represent Qatar’s legacy.

The symbol is white with crimson patterns, and it sits on a crimson background that matches the colors of the Qatari national flag. In contrast to the aspirational and vibrant slogan branding, the new logo gracefully emphasizes themes about Arab traditions and culture, the game, and football’s unifying force.

Qatar will host the World Cup for the first time ever in an Arab country.

After South Korea and Japan in 2002, this will be the second time an Asian country hosts the tournament. Qatar, on the other hand, will be the first Arab and Muslim country to host the entire event. It will be held in November and December.

When it comes to Qatar, though, things get complicated. Qatar, which is located in the Middle East, has excruciatingly hot temperatures that sometimes reach 50 degrees Celsius. Hosting any form of the FIFA world cup in such conditions is nearly impossible.

As a result, the FIFA World Cup has been moved from its traditional summer slot to the winters in order to combat the challenges posed by Qatar’s weather.

Finally, Qatar is the smallest nation to ever host the World Cup in terms of population and land area.

Qatar is a desert country with a scorching climate. The high temperatures in Qatar are one of the key reasons for moving the World Cup from summer to winter. However, it still feels the same in the winter.

To combat the heat and humidity, the Qatar Football Association has vowed to provide stadiums with air cooling systems that keep temperatures below 27 degrees Celsius.

Sweat, Blood, and a Cool Breeze

FIFA 2022 tournament will be the last to involve 32 teams, with an increase to 48 teams scheduled for the 2026 tournament in the United States, Mexico, and Canada. Since France 1998, the FIFA men’s World Cup has included 32 teams in each of the last six tournaments.

“In line with the conclusions of the feasibility study approved by the FIFA Council at its last meeting, FIFA and Qatar have jointly explored all possibilities to increase the number of participant teams from 32 to 48 teams by involving neighboring countries at the FIFA World Cup Qatar 2022,” FIFA said in a statement.

We say ‘The More The Merrier’

6. The Most Expensive FIFA World Cup

Brazil spent a record 15 billion dollars on the World Cup in 2014. Over $11.6 billion has been spent by Russia. These figures, however, will not be able to compete in the 2022 Qatar World Cup.

Qatar is estimated to be spending $200 billion on infrastructure projects, including the development of stadiums, motorways, hotels, and other facilities. This will make the FIFA World Cup in Qatar one of the most expensive in the sport’s history.

Furthermore, during their bidding procedure in 2010, this figure did not include broadcasting rights or other fees. Qatar is leaving no stones unturned to ensure a lively experience for the fans and make sure the World recognizes their efforts.

Qatar will not only be the first Middle Eastern country to host the FIFA World Cup in 2022, but it will also be the only time the famous tournament is held in Asia.

It happened for the first time in Asia in 2002 when Japan and South Korea co-hosted the FIFA World Cup. As a result, FIFA 2022 will be a historic event for Qatar, as it will be the first Middle Eastern country to host the tournament.

The schedule for the FIFA 2022 World Cup is what gets football fans excited. Football Fans from different geographies follow an entirely different Bio-Clock, we at BrainyWit can certainly vouch for that. Each day, four matches are played within a 46-mile radius of each other on the group stage.

This extremely convenient timetable offers spectators a once-in-a-lifetime opportunity to watch top-level football. The tournament schedule is provided below to assist you in preparing your perfect FIFA 2022 World Cup experience.

FIFA World Cup 2022 Tickets Price in Indian Rupees, US Dollars, British Pound, and so on. Fans Eagerly wait to know the Ticket Price to plan their budget.

Check out the Official ticket pricing for the upcoming tournament.

La’eeb, the FIFA 2022 World Cup’s official mascot, has been announced. La’eeb is an Arabic phrase that means “super-skilled player” and “encourages everyone to trust in themselves since ‘Now is All.'”

The mascot was revealed at the FIFA World Cup Qatar 2022 Final Draw, which took place in Doha on Friday night, April 1.

“We are happy to present La’eeb as the Official Mascot for the first FIFA Globe Cup in the Middle East and the Arab world,” said Khalid Ali Al Mawlawi, Deputy Director-General, Marketing, Communications, and Tournament Experience, Supreme Committee for Delivery and Legacy. He’s from the mascot verse, which is an unfathomable realm. Everyone is encouraged to picture what it would look like.”

La’eeb will be all over the place, greeting visitors, inspiring young fans, and cheering on the action throughout the event, which runs from November 21 to December 18.

FIFA stated. that the brave and inspiring La’eeb has been to every previous FIFA World Cup competition and has been a part of some of football’s most renowned moments, including a handful of legendary goals. La’eeb will be remembered for his youthful spirit, which he will disseminate wherever he goes.

La’eeb is a mascot from a parallel planet where tournaments are held. It’s a universe where ideas and imagination are the foundations of characters who exist in everyone’s minds.

We’ll have to wait and keep guessing. Till Then Hold Your Curiosity, we will be back with the Cure.

Also, France is the Reigning Champion. We hope you better not be surprised by this.