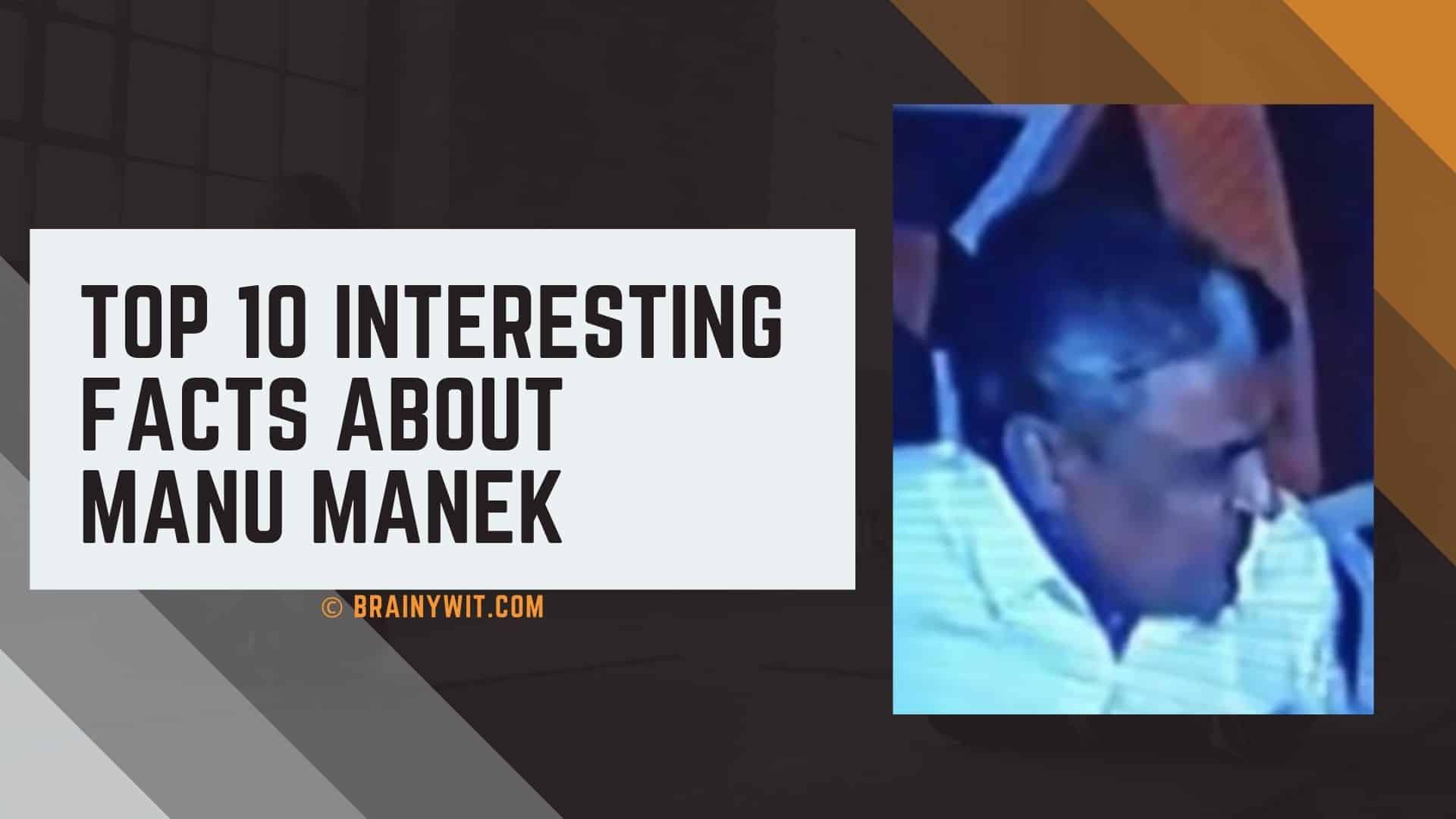 Harshad Mehta’s life story was recently portrayed in a web series titled ‘SCAM 1992‘ on the OTT platform SONY LIV, which acquired worldwide popularity and brought the historic scam back into the public view.

Before Harshad Mehta, in the late 1980s, there was a greater personality in the stock market called ‘Manu Manek,’ aka ‘The Black Cobra‘ who used to manipulate the market with his pessimistic actions.

Who is Manu Manek?

Manu Manek, a stock market leader in the late 1970s and early 1980s, dominated the market until Harshad Mehta came and took over.

Manu Manek was a legendary figure and a tremendous player who ruled the Indian Stock Market. Apparently, it was very difficult to become a corporate director without his approval.

Some say that on election day, he would transmit the names or lists of directors to corporations – and only those people were ever elected. Manu Manek was a man of authority!

Manu Manek was born in Kolkata between the late 1940s and early 1950s according to what is known from sources. He began working as a stockbroker on the stock market after finishing his education. He sat on the sidelines at this time, learning the ins and outs of the early Indian markets.

Manu Manek rose to prominence as a prominent figure on the Indian stock exchange/Dalal Street.

Unofficially, he was known as the “King of the BSE” (Bombay Stock Exchange), and the entire network of stockbrokers relied on his every move. Manu Manek has either been directly acquainted with or led other investors who are currently the present market’s “Bulls and Bears.”

His influence even extended to trading & exchange officials, who would sometimes favor him when it came to paying dues. This meant that not only did Manek control the exchange, but he also had a strong grip on the companies that were listed. As a result, he became the unchallenged ruler of the Bombay stock exchange.

Still in India, many describe Manu Manek’s success to God’s gift of the ability to read the markets. Let’s take a look at the strategy that helped him succeed.

“Manu Manek Real Photo” In the Indian stock market, there are few figures as mysterious as Manu Manek. Despite the fact that little is known about him, he controlled the Indian Stock Market in the last century.

This picture is a rare and real-life photograph of Manu Manek, you can see Manu Manek A.K.A. the Black Cobra on the left. Curious to know what he might be talking or scheming about? Well, So are we.

Manu Manek net worth is believed to be around $50 million at the time of his death. The Black Cobra of the Indian Stock Market was able to achieve this sum because of his shrewd tactics leading to a successful profession as a powerful stockbroker and investor. During his stock market and trading days, he had accumulated a fortune.

Harshad Mehta’s path met with that of Manu Manek on multiple occasions. In this case, the point of disagreement was a firm called Indrol. Manu Manek had taken a short position in this stock, as he normally did.

Harshad Mehta had a long position on the other side of the court. Harshad Mehta continued to increase the purchasing pressure in this stock, forcing the bears to flee for safety. The Cobra, as the last option, propagated a rumor that Mehta had lost 1 crore rupees in the stock market.

This was done in order to undermine Mehta’s credibility. Harshad Mehta, on the other hand, was the one who got the last laugh in this instance. He paid off all of his debts and won the race.

Reliance Industries was thriving in the early 1980s. This was partially due to the company’s constant performance, and partly due to Dhirubhai Ambani’s commitment to his shareholders’ best interests.

Dhirubhai had the uneasy sensation that if investors were not satisfied, he would be unable to get additional funds, limiting his progress. As a result, he treated investors like family.

The courageous Manu Manek had realized the size of the profit the bear cartel could make if they were able to successfully implement the short-selling scheme. To bring the price down, large volumes of Reliance shares were continually shorted.

The bear cartel’s goal was to flood the market with Reliance shares and raise supply by a factor of ten. They anticipated a drop in the stock price as a result. They sold the shares at a high price in the hopes of repurchasing them later when the price dropped. They hoped to make a lot of money this way.

Reliance deployed their lieutenant and Anand Jain was assigned to head the defense.

Anand Jain was able to turn the defensive stance into a counter-attack, and he went after the bear cartel with his companions.

Manek’s only option now was to increase his investment and risk the shares rising even higher, compounding his losses. Manu Manek acknowledged defeat and chose to minimize his already significant losses by selling the shares to Anand Jain at a higher price.

The bear cartel started selling the shares they were loaned, as planned. In this situation, however, Anand Jain and other loyalists began purchasing the bears’ shares. This not only thwarted the bear’s strategy but also pushed the price of Reliance upward.

When it came time to deliver, the price had risen dramatically. This meant the bears would have to pay a higher price for the shares in order to deliver them to Anand Jain and other loyalists.

The BSE was shut down for a few days as a result of the conflict with the cartel. Manek’s only option now was to increase his investment and risk the shares rising even higher, compounding his losses.

Finally, Manu Manek acknowledged defeat and chose to minimize his already significant losses by selling the shares to Anand Jain at a higher price.

How did Manu Manek dominate the market?

1. Manu Manek was famous for the “Short-Selling” of stocks

Short-selling can be done in one of two ways. If an investor wants to short-sell some familiar shares, they can sell them at a higher price, wait for the prices to decrease, and then purchase them back at a cheaper price, profiting on the price difference.

Another alternative for an investor who wants to short-sell shares that he does not own is to borrow shares from someone who does. This can be accomplished in two ways:

To create big gains, Manu Manek adopted the tactic of lending shares. He gained notoriety and became known as the “Cobra of Dalal Street” as a result of this strategy.

The Bearish strategy is based on the market’s pessimistic view. Investors seek out companies that are already performing well in the market and are going to see their prices drop.

This technique is known as the “Bearish Strategy,” and it is based on the prediction that the company’s share prices will fall in the future. Investors profit by holding holdings while the price of shares is high and waiting for the price of shares to decrease. “Short Position” is the name given to this position.

Typically, investors purchase a firm’s shares at a lower price and wait for the company to perform well so that the price of the shares can rise. Investors sell their shares when the price of the stock reaches its highest, and this is how they benefit in the market and generate capital gains.

The “Bullish Approach” is a profit-making investing strategy based on market expansion and improving a company’s performance. This approach is based on the assumption that the stock market will improve, increasing the price of the company’s stock. In the stock market, this is known as a long position.

Members of the cartel agreed to take a different approach to invest after the final bout with Harshad Mehta. This includes putting a strong emphasis on value investing.

Manu Manek, often known as the “Cobra,” profited handsomely from the market’s downturn using his short-selling approach. He was competent and courageous, and he ruled the market for years before the Big Bull arrived.

Many of Manu Manek’s associates, such as Rakesh Jhunjhunwala and Radhakishan Damani, have gone on to become extremely successful stock market investors.

1. The standoff between Manu Manek and Anand Jain became so heated that the Bombay Stock Exchange was forced to shut down for a few days.

2. Manu Manek was the most important figure in the Bear Cartel.

3. Manu Manek is called the Black Cobra for his fierce strike at the last moment.

5. According to some sources, Manu Manek used to enter the stock market after the price of a share had risen dramatically.

6. He sorted the stocks for two days, increasing the selling pressure in the market.

7. According to this logic, if the market grows, the price of a stock will decline.

8. Manu Manek’s tussle with Reliance backfired and instead boosted the price of Reliance shares.

9. It’s been said that Manu Manek died in India in the year 1997. The cause of his death, however, has yet to be revealed.

Stock market investing is similar to gambling. Knowing the rules and how to play makes analyzing and making predictions much easier. This game may not be the best bet for you if you lack the necessary abilities, information, or insights.

Let us know what other interesting facts you would like to know about Stock Market and we would cover them in our coming article. Stay Connected, Stay Curious, follow BrainyWit to feed your hungry brain.