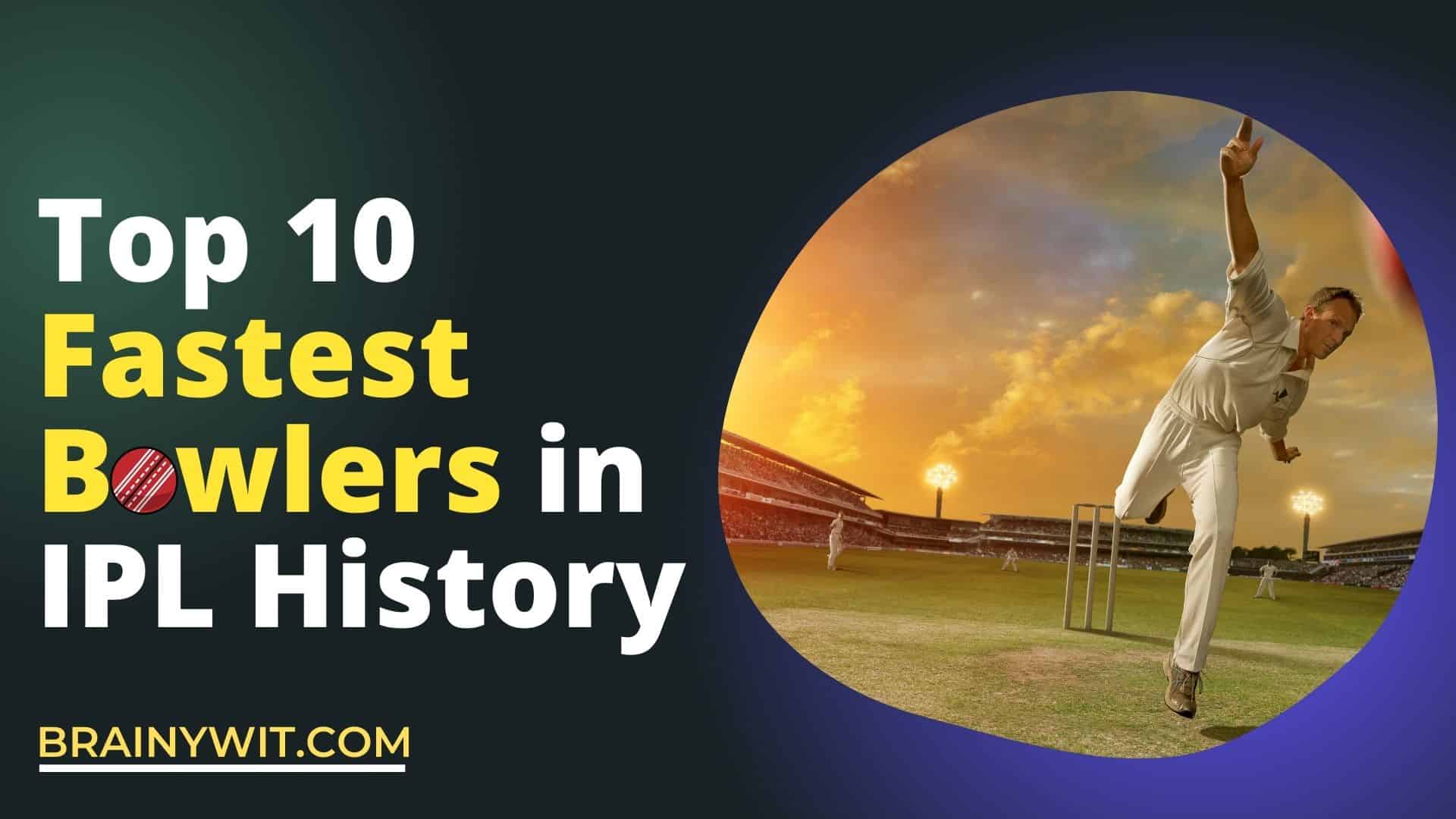 Fast bowling is an art form that involves more than just running and bowling. A lot of strength and agility are required, as well as the ability to handle a tremendous workload. With IPL (Indian Premier League) happening every year, the race for the coveted title of the “fastest bowler in IPL” is always on.

Fast bowling is difficult. Mastering this technique demands far more rigour and discipline. To be able to deliver a red cherry at more than 140km/h, one must be extremely fit, with a robust upper body, fat-free shoulders, and a rigid base. Maintaining it throughout the year makes it even more challenging.

To add to their misery Fast bowlers are somewhat underappreciated when it comes to IPL or any format of cricket. Today, most people come to see the batsman score runs, therefore the fast bowler is the antagonist.

So, who are the fastest bowlers in IPL history that have bowled the quickest deliveries over the years?

Recent years have shown an increase in the number of pacers who can generate blinding speed and instill fear among top batsmen in the world. This was not always the case, but with time, even Indian bowlers who primarily favor the spin attack learned the need of speed in the game’s shortest format.

T20 cricket is a brew of diverse aspects. In this format, cricketers are trying out all of their techniques. Bowling slower deliveries has so grown popular. However, no matter how many tricks a bowler performs, the pace remains the same. Nothing can replace a raw and authentic speed. As a result, every IPL team boasts at least one express pacer.

Former Australian bowler Shaun Tait holds the record for the fastest bowler in IPL history. He clocked 157.7 kmph against Delhi Capitals while playing for Rajasthan Royals (then Daredevils). Surprisingly, he bowled against his countrymate, Aaron Finch.

The young fast bowler from Jammu and Kashmir has the potential to become the nation’s latest fast bowling sensation. With his lightning-fast deliveries that leave batsmen in amazement, he has emerged as one of the season’s best developing performers. Hyderabad skipper Kane Williamson, in particular, saves his overs so that he can wreak havoc on the opposition in the slog overs.

Umran Malik hit Rovman Powell with a thunderbolt that clocked 157 kmph in the match against the Delhi Capitals. The incident occurred in the final over of Delhi’s innings, and Powell only needed to contact with the ball as it sped over the boundary.

This South African fast bowler is currently one of the world’s fastest bowlers in IPL 2022. For the past few IPL seasons, he has consistently touched 150kmph+. He is ranked seventh among bowlers in the ICC Men’s T20 rankings. Year after year, the 28-year-old pacer proves to be a brilliant bowler in cricket’s shortest format.

Anrich Nortje joined the Delhi Capitals as a substitute for Chris Woakes in the IPL in August 2020. On 14 October 2020, during the 30th match of the IPL 2020, Nortje bowled at 156.22 km/hr (97 mph) to Rajasthan Royals’ Jos Buttler. Despite the fact that it was a boundary, the Proteas fast demonstrated to the world that he can bowl at an extraordinary pace.

In his IPL 2020 debut season, he also delivered his second fastest delivery in league history, registering 155.2 km/hr against Rajasthan Royals.

Dale Steyn’s inclusion on the list of the fastest bowlers in IPL should come as no surprise. The right-arm pacer, nicknamed ‘Steyn Gun,’ played for the Deccan Chargers, Sunrisers Hyderabad, Gujarat Lions, and Royal Challengers Bangalore in the IPL. During the 2012 edition of the premier tournament, he hit 154.4 kph. He is undoubtedly one of the best pacers in the game’s history, having had an impact in all three formats.

It goes without saying that Jofra Archer is a dangerous bowler to face because to the velocity he produces. He’s only been around for a few years, but he’s already rattled several batters around the world with his lightning-fast deliveries. Archer has plagued batsmen with his blistering pace, frequently clocking above 150 kmph.

In one of the games, he also recorded a delivery with a speed of 153.62 kmph. Jofra is among the top ten fastest bowlers in IPL history.

Kagiso Rabada has been outstanding in the IPL. He is one of the reasons why the Delhi Capitals were so successful in 2019. The leading South African fast bowler took 25 wickets in 12 games in the 2019 season but nearly lost out on the Purple Cap due to injury near the season end. He made up for this in 2020, returning with 30 wickets and winning the Purple Cap.

During the innings, Ferguson bowled the delivery to Ruturaj Gaikwad. Lockie Ferguson, on the other hand, had a bad day with the ball, recording his worst IPL stats of 56 runs conceded in 4 overs without picking up a wicket.

Pat Cummins, an Australian fast bowler, rarely participated in the IPL owing to chronic injuries, but he made sure his name was recorded. While playing for the Mumbai Indians in 2017, the speedster set a tournament record of 153.56 kmph. Cummins had a good campaign and was crucial for the Mumbai Indians in 2017. He took 15 wickets in 12 matches with an economy of 8.07.

Navdeep Saini is currently one of India’s most gifted pacers. He’s also known for being one of India’s fastest pacers. Even before he made his international debut, he was the talk of the town.

Alzarri Joseph of Gujarat Titans bowled the 10th fastest delivery in the 2022 Tata IPL. This is the fifteenth season of the celebrated Indian Premier League.

He achieved this feat in the 43rd match of the tournament bowling against Royal Challengers Bangalore.

Who is the fastest bowler in IPL?

Who is the best fast bowler in IPL?

Who is the current fastest bowler in the world?

Australian left-arm fast bowler Mitchell Starc with the fastest ball of 160.4 km/hr is the current fastest bowler in the world?

Who bowled the fastest ball?

Shoaib Akhtar’s 161.3 km/hr delivery against New Zealand in the year 2002 makes him the fastest bowler of all time.

Who is the fastest bowler in India?

Who is the no 1 bowler in IPL?

Sri Lanka’s Lasith Malinga with 170 wickets in 122 matches at an economy of 7.14 runs per over and block-hole Yorkers is considered the all-time greatest bowler in IPL.

Umran Malik bowled the fastest delivery of IPL 2021 when he clocked 152.95kph against Royal Challengers Bangalore.

The current 2022 season of IPL saw the Umran Malik breaking the record and becoming the second-fastest bowler in IPL history.

With cricket being more rigorous & technical now, the ace of pace has been rejuvenated. Many Indian youngsters are looking up to fast bowling as a career option, thanks to the success of the pace brigade in recent IPLs.

With a lot of cricket being played around us, the day is not far when we would see new names on this list.