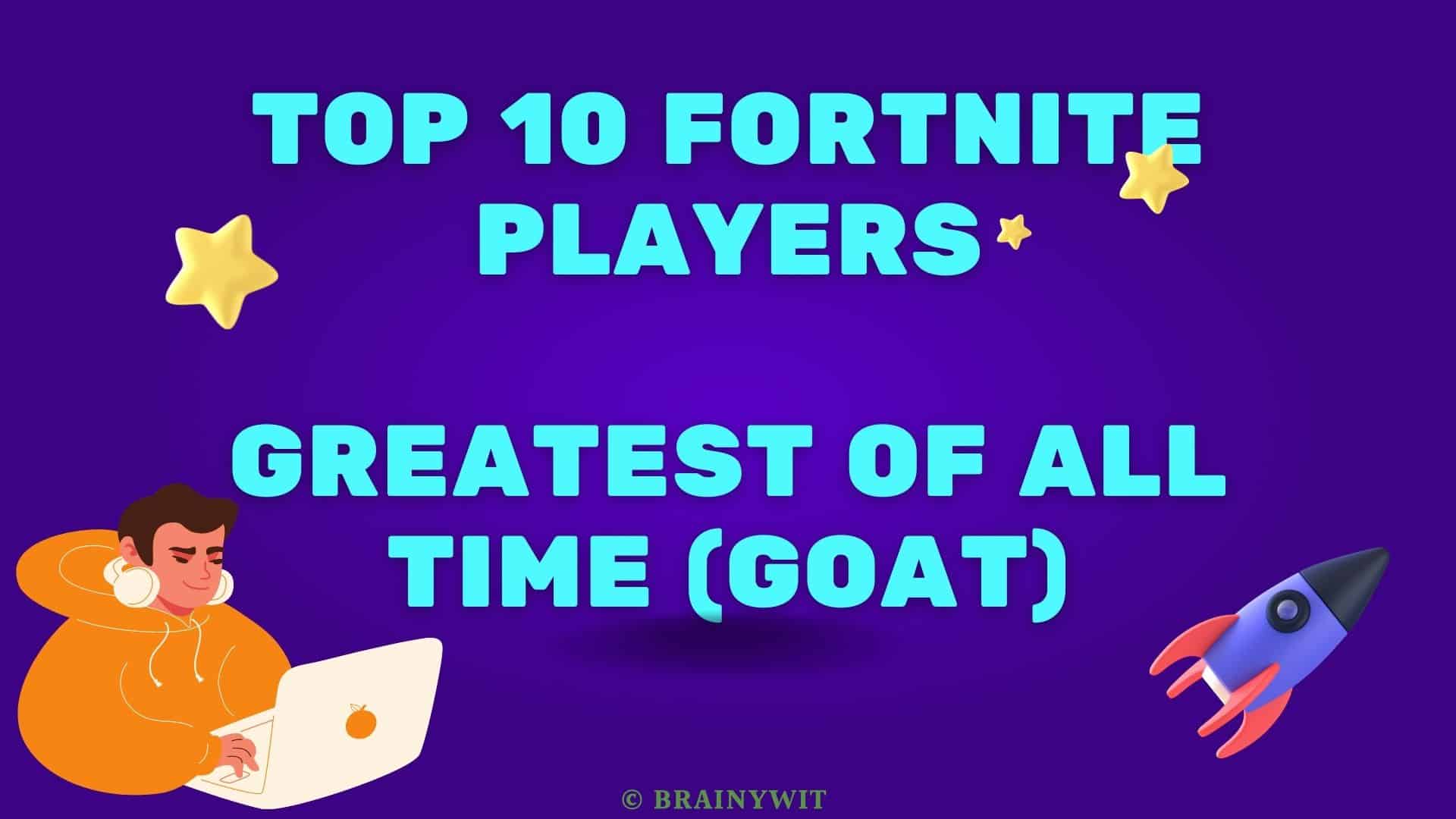 Now Fortnite is a world record breaker, with millions of players, and its valuable and loyal fan-following in the world of esports. Many may argue that Fortnite is one of the modern battle royale genre’s founding fathers, having pioneered the concept from the start.

The initial developing phase of Fortnite esports has passed, and the elite/pro players have been exercising their talents at the top of the leaderboard for years. “Who is the best Fortnite player?”. We’ve compiled a list of the top ten to make it easier.

This list features the best of the best in Fortnite, from the most elite gamers to the highest-earning players on the platform. Let’s check out which Fortnite player has earned the maximum loot.

Top 10 Fortnite Players of All time

Kyle ‘Bugha‘ Giersdorf is the highest-paid Fortnite player in history by a long shot. In one fell swoop, he won $3,000,000 in the Solo category of the first (and so far, only) Fortnite World Cup.

He dominated the battlefield to take home one of the most significant solo prizes in esports history, propelling him into the top ten esports earnings in a single move.

Bugha’s success didn’t stop there, as the young player went on to dominate the North American circuit, racking up additional victories. By 2022, he’d earned more than $3,200,000, been signed by Sentinels, and accumulated five million Twitch followers.

There appears to be just one option for the king of competitive Fortnite at the top of the list. There hasn’t been greater competition in Esports than the Fortnite World Cup in the summer of 2019 since its beginning in 2017.

At that time in Esports history, it had the most competitors and the largest prize fund. Bugha, on the other hand, dominated the competition.

Bugha has remained one of the leading contenders in the NA East region since then. He has qualified for and competed in every major FNCS tournament, placing in the top ten in both the duos and Winter Royale 2019 competitions. To dethrone Bugha as the top Fortnite player of all time, another player will have to go on a big run.

‘Aqua‘ is the world’s second-highest Fortnite esports earner, according to esportsearnings.com. Aqua has earned just shy of $2 million in profits in a remarkably short amount of time, which includes a massive Duos triumph at the Fortnite World Cup in 2019.

Aqua has maintained a significant sense of supremacy in the European scene since then, as one of the few professional esports players from Austria. With a Twitch following of nearly half a million people, he’s a world-class competitor and one of the finest Fortnite players around.

Aqua has been one of the best Fortnite players in the world since the World Cup, regardless of geography. Aqua, along with Tschinken and Stompy, won the FNCS trios championship for the second time. Aqua went away with another large payday in Squads, finishing in the top ten squads in Europe.

Aqua once again proved that he is one of the finest of the best in duos. In FNCS Duos, he finished fourth in Europe alongside Stompy. He followed up these great performances with a third-place finish in the FNCS Solos competition across Europe.

Benjyfishy, another impressive young challenger, has amassed a sizable fortune in a short period. He’s easily one of the most well-known figures in Fortnite esports, with a Twitch following of more than 3.5 million people by 2022.

Benjyfishy, like EpikWhale, is a member of NRG Esports and a prominent force in the European scene. He’s one of the finest Fortnite players in the UK, and his earnings from the game total almost half a million dollars.

Benjy and Mr. Savage were known as the world’s most adorable duo on their way to the World Cup. Benjy continued to win fans’ hearts throughout the World Cup with his fat smile and excellent skills. He placed 14th in duos and 25th in solos, demonstrating that he is one of the best players in the world.

Within the competitive Fortnite community he became an immediate legend and is largely recognized as one of the best Fortnite players of all time.

Benjy is a fan favorite because he is devoted to Fortnite and used the competitive aspect of the game to support his family, which is incredibly mature for a 16-year-old who amassed hundreds of thousands of dollars in such a short period of time.

Zayt is the first Canadian esports player to make the list, and he is one of the most well-known players in the Fortnite community. He’s another member of NRG Esports, which has a stacked lineup as you can see.

Zayt has a slew of big achievements under his belt, including a once-in-a-lifetime double qualifying for the 2019 Fortnite World Cup. If you’re interested in Fortnite betting, you’d be better off betting on some of Zayt’s esports odds.

Zayt was one of the safest bets in the Fortnite landscape, along with Saf, his Duos partner. Zayt has amassed roughly $1.2 million in profits and 300,000 Twitch followers by 2022.

Zayt’s largest single event win was $750,000.00 from the Fortnite World Cup Finals 2019 – Duo on July 27, 2019. He came in fourth place, accounting for 56.49 percent of his total prize money. Following the World Cup, Zayt maintained his Fortnite dominance in North America.

Zayt’s name was almost always towards the top of the leaderboards in any major tournament. It seemed inescapable. Zayt finished fourth in the trios, behind Saf and Zyfa.

He teamed up with Commandment, Highsky, and Saf in Squads, all of whom are strong solo players. They came in fourth place once more.

It was the same narrative with the same people in duos. During Chapter 2: Season 2, Zayt and Saf collaborated and won the FNCS duo finals, confirming that they are the best tandem in North America.

Zayt finished ninth in the following FNCS, making him one of just four players in the world to finish in the top ten in each of the four FNCS competitions since the World Cup.

Mr. Consistency, Zayt, is a competitive Fortnite player in the NA East region.

When it comes to Fortnite, Mongraal is something of a prodigy. He’s also one of the top Fortnite gamers ever, having begun competing at the age of 13 years old. By 2022, he’d established himself as one of the best competitors, earning more than half a million dollars and getting signed to FaZe Clan, one of the most successful organizations in the industry.

In the 2019 Fortnite World Cup, he came in second place in both the Solo and Duos categories, earning him a lot of money. Because of his tremendous popularity and success as a pro player, he is the face of competitive Fortnite in Europe.

Mongraal rose to prominence in late 2018 and early 2019 as a result of his famous Twitch streams. Mongraal would stream himself playing Fortnite constantly and show the world how far he had progressed in the game every day. He’s also one of the most popular Fortnite content makers, with 5.1 million Twitch followers.

Diego ‘Arkhram‘ Palma was born in 2003 and is a tough competitor who is a member of 100 Thieves, one of the most dominant esports teams. He’s arguably one of the best Fortnite players in the world, having won around $700k in tournaments in just a few years.

He finished fifth in the Fortnite World Cup Duos division in 2019, as well as qualifying for and placing fifth in the Solo category. Arkhram is one of the finest Fortnite broadcasters, with over 200k followers — a significant number for such a young producer.

Dubs, like Mongraal, is a member of FaZe Clan, the world’s most successful esports organization. He’d earned about half a million dollars from Fortnite tournaments by 2022 and was widely recognized as one of the finest Fortnite players on the planet.

He has a sizable YouTube following, with more than 300,000 subscribers in his short stint as a Fortnite participant. Dubs finished second in both the Duos and Solo categories in the 2019 Fortnite World Cup. He is without a doubt one of the best Top 10 Fortnite competitive players of all time.

He’s known as K1ng by name and by attitude, and he’s one of Fortnite’s freshest and most dominant opponents. K1ng was only 13 years old when he competed in the Fortnite World Cup, yet he annihilated any opponent he faced.

He was discovered to be one of the most gifted Fortnite gamers to have come out of the LATAM region, placing first in nearly every competition he entered.

Saf is a world-class technical player with exceptional constructing and editing skills. He has the ability to outbuild and kill everyone in the world at any given time, making him dangerous in any game position.

Saf is also one of the world’s most consistent players. He’s been a top competitor since 2018, and he and Zayt recently won the FNCS duos.

After a streak of triumphs and astonishing performances, he retired late in 2021 as a dominant North American player who had earned more than $1.1 million.

Since the World Cup qualifiers at the start of 2019, he and his partner, Zayt, have finished in the top five in every major tandem tournament. Saf is currently streaming Valorant and has a following of 100k Twitch users as of 2022.

He’s teamed up with players like Mongraal, Magin, and Svennos, and by 2022, he’d earned over $650,000 in Fortnite competitions. Mitr0 is without a doubt one of the greatest Top 10 Fortnite players of all time, as evidenced by his nearly 1 million Twitch followers.

So here is our list of Top 10 Fortnite players of all time and it’s fair to say that the highest earners in Fortnite are doing quite well. Do share your comments and spread the word. Also, let us know if you want us to cover other gaming topics, mentioned in the comments below.

Are you curious how did these guys reach the top of the ladder? The answer is simple, Keep the Grind On. The Cure for Boredom is Curiosity, and the Cure for Curiosity is BrainyWit.