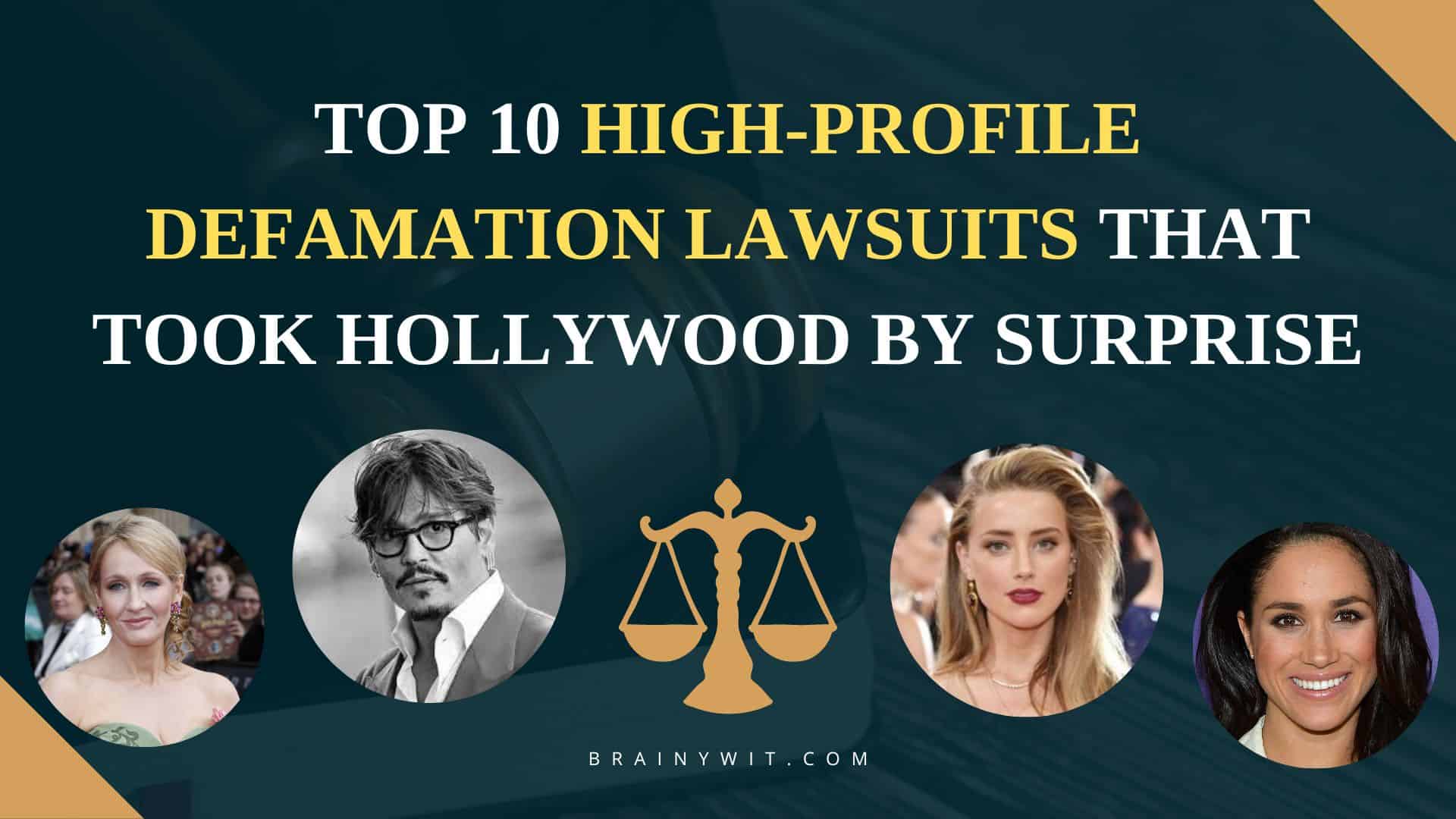 Throughout history, we have seen that famous defamation cases or High-Profile Defamation lawsuits have been a media favorite for nearly as long as they have existed. These lawsuits are used to argue false accusations and rumors generated by paparazzi and even other A-list celebrities. It’s regarded as a means of preserving and enhancing one’s reputation.

While we often associate celebrity life with red carpet events and a lavish lifestyle, this is only one facet of celebrity life. The lives of the wealthy and famous may be painfully difficult at times, and the expense of maintaining such a high-profile lifestyle can be considerable, especially when it leads to lawsuits.

Whether they’re fighting for justice, reputation, or just to create a precedent, celebrities have made their legal mark and drawn a line in the sand about what kind of abuse they won’t tolerate.

Let’s take a look at the top 10 famous defamation cases in the history of Hollywood.

We are pretty much sure that you might have heard about one of the most famous defamation cases in 2022. Johnny Depp recently won a defamation lawsuit against his ex-wife, Amber Heard, after a jury determined that she defamed Depp by claiming that he assaulted her during their relationship.

The jury unanimously determined that Heard’s allegations against Depp could not be substantiated and that she knew her claims of abuse were false when she published her 2018 op-ed.

When she wrote her op-ed, Heard acted with actual malice, according to the verdict. In his defamation claim, a jury awarded Depp $10 million in compensatory damages against his original defamation claim of $50 million and $5 million in punitive damages.

The Plaintiff Mr. Johnny Depp said that “the jury gave me my life back. I am truly humbled.”

Johnny Depp lost his defamation lawsuit against British newspaper The Sun in November 2020 over an article labeling him a “wife abuser” with respect to claims concerning his relationship with ex-wife Amber Heard.

According to UK law, The Sun had the burden of proof to prove that he had earned this title, and an ugly trial proceeded, with the court emphatically upholding their conviction that Heard had been physically abused by Depp and had feared for her life on multiple occasions.

In light of this rulings and the information that the trial discovered, including accounts of Depp’s substance usage and the actor’s own graphic threats toward Heard, Holloywood studios drifted away from Depp professionally.

Depp preserved that he has been wrongly accused, alleging physical and verbal abuse from Heard throughout their relationship, and is backed up by his most ardent supporters.

He filed an appeal of the court’s verdict, gearing up for his $50 million defamation claim against Heard herself which he won in 2022. The jury awarded Depp $10 million in compensatory damages and $5 million in punitive damages.

Meghan Markle sued Associated Newspapers, the publisher of British publications like The Sun, in October 2019 for publishing a handwritten letter between her and her father in 2018.

These publications, according to the Duchess, violated the Data Protection Act, misused private information, and infringed on copyright. They’ve responded by claiming that Meghan’s letter was an official royal message meant for public relations, rather than an original work.

Meghan’s letter to her father, Thomas Markle, was an anguished plea for him to stop speaking to the media and posing for paparazzi photos, warning him that he was tearing her heart by continuing to abuse her like way. Meghan and her father are still at odds, with the publishing of the letter serving as the final straw in her attempts to contact him in the run-up to the royal wedding.

The court decided with Markle in December 2021, and she stated her legal victory. “While our victory sets a precedent, what matters most is that we are now collectively brave enough to transform a tabloid industry that breeds cruelty in individuals and profits from the lies and agony they cause,” she said in a statement. This case was certainly one of the famous defamation lawsuits in contemporary British history.

The Daily Mail, a British tabloid, came under fire in 2014 after publishing an allegation that J. K. Rowling, the author of the immensely acclaimed fantasy Harry Potter series, had lied about a tale she told in an interview.

Rowling filed for defamation lawsuit and revealed that after a Daily Mail report she had been stigmatized by members of her church because she was a single mother.

The author was accused of making false claims against churchgoers, according to the story. “How JK’s sob story about her single mother past startled and perplexed the church members who cared for her,” the Daily Mail headline read.

When Rowling sued them for libel, the tabloid was forced to pay her “substantial damages” and apologise in their paper, which read: “We accept that Ms. Rowling’s article did not contain any false claims and apologize for any contrary suggestion and have agreed to pay substantial damages to Ms. Rowling, which she is donating to charity, as well as a contribution to her legal costs.”

Certainly, one of the most famous defamation cases Hogwarts will ever witness.

Read More: Top 10 Most Paid Actors in the World

In 2018, a group of authorities from the California Food, Drug, and Medical Device (FDMD) Task Force launched a complaint against Gwyneth Paltrow’s wellness brand Goop for making unfounded claims about the health advantages of some of their products, including the famed vaginal jade egg.

Goop’s statements about this “detox egg,” such as that it may enhance bladder control or prevent uterine prolapse, “were not backed by competent and reliable science,” according to California prosecutors. “We will vigilantly protect consumers against companies that promise health advantages without the basis of sound evidence…or any science,” the judge said.

Oscar-winning director Roman Polanski was awarded £50,000 in damages by a British High Court after suing Vanity Fair in this famous celebrity defamation lawsuit over an allegation against him in 2005.

According to the post, director Roman Polanski sought to seduce a “Swedish beauty” in a New York restaurant bar, whispering lovely nothings in her ear while touching her thighs and promising to make her “another Sharon Tate.”

The story, according to the director, made him appear “callously dismissive” of the memory of his slain wife Sharon Tate. This led to Polanski filing a defamation lawsuit with a defamation claim.

7. CBS vs. the Federal Communications Commission (2004)

We hope you remember the notorious 2004 Super Bowl wardrobe mishap. Janet Jackson’s bustier was ripped off, exposing her breast to the world, thanks to Justin Timberlake. CBS then initiated a lawsuit, which was settled after seven years.

CBS was fined $550,000 by the Federal Communications Commission for nudity during a public broadcast and a lack of preparation by the network. The FCC, CBS claimed, was inconsistent and had previously missed comparable, if not worse, issues. In the end, the court ruled in favor of CBS, and Janet Jackson and Justin Timberlake are now more famous than they’ve ever been.

Closer, a French magazine, published topless photos of the Duchess of Cambridge in 2012, which they took while she was sunbathing at a private villa without her knowledge. The royal family filed a defamation lawsuit against the publication, which was finally settled in early September 2017.

Again, one of the most famous defamation cases that involves a British royalty

Nicki Minaj and Tracy Chapman’s defamation lawsuit over the former’s improper sampling of Chapman’s song “Baby Can I Hold You?” ended on January 7, 2021.

Minaj claimed in 2018 that she had “no knowledge” that her song sampled Chapman’s and pleaded with the singer to give her the rights so she wouldn’t have to delay the release of her new album. Chapman, on the other hand, has continually refused, and two years later, she has accepted Minaj’s defamation claim settlement offer of $450,000.

“I am glad to have this situation settled and grateful for this legal resolution,” Chapman told NBC News. “It underlines that artists’ rights are protected by law and should be respected by other artists.” “I was asked several times in this situation for permission to use my song; each time, I politely and promptly declined. Despite my clear and unambiguous objectives, Ms. Minaj apparently opted not to hear and use my work.”

Despite the fact that Minaj eventually pulled the song from her album, it was pirated and circulated online. The song’s distribution will be prohibited as a result of this court decision.

Nicki Minaj vs. Tracy Chapmanis one of the most recent and celebrity defamation lawsuits that we saw amid Covid 19.

The tragic tale of the ill-fated Fyre Festival is a harrowing one. Essentially, a group of wealthy individuals spent a large sum of money to attend what was advertised as the world’s most exclusive and luxury music festival. In truth, everything was far from lavish, and the festival was called off after only one day.

A $100 million class-action lawsuit was shortly launched against the organizers, but another was quickly filed against celebrities who served as “Fyre starters” on social media in the lead-up to the event. Bella Hadid, Kendall Jenner, and Emily Ratajkowski were among the celebrities that were paid to promote the festival.

According to Fortune, there is precedent for the allegations, and while the case is still pending, if the celebrities are found guilty, it could have a long-term influence on celebrity endorsements.

Kendall Jenner paid Gregory Messer, who was in charge of Fyre Fest’s bankruptcy filing, a settlement in May 2020. She had been compensated $275,000 for a social media post promoting the event, but she only received $90,000.

These aren’t the only defamation cases of their kind; new ones pop up every day, and some are in the process of being resolved. We noticed that most of these famous defamation cases are high-profile celebrity defamation lawsuits. We found none to one where the lawyer’s craft made it famous litigation.

Although bringing a libel suit against tabloids may appear to some to be frivolous, gossip and rumors may occasionally be harmful to our favorite celebrities. Let’s remember that before we go out and buy the next issue of the Daily Tabloids!