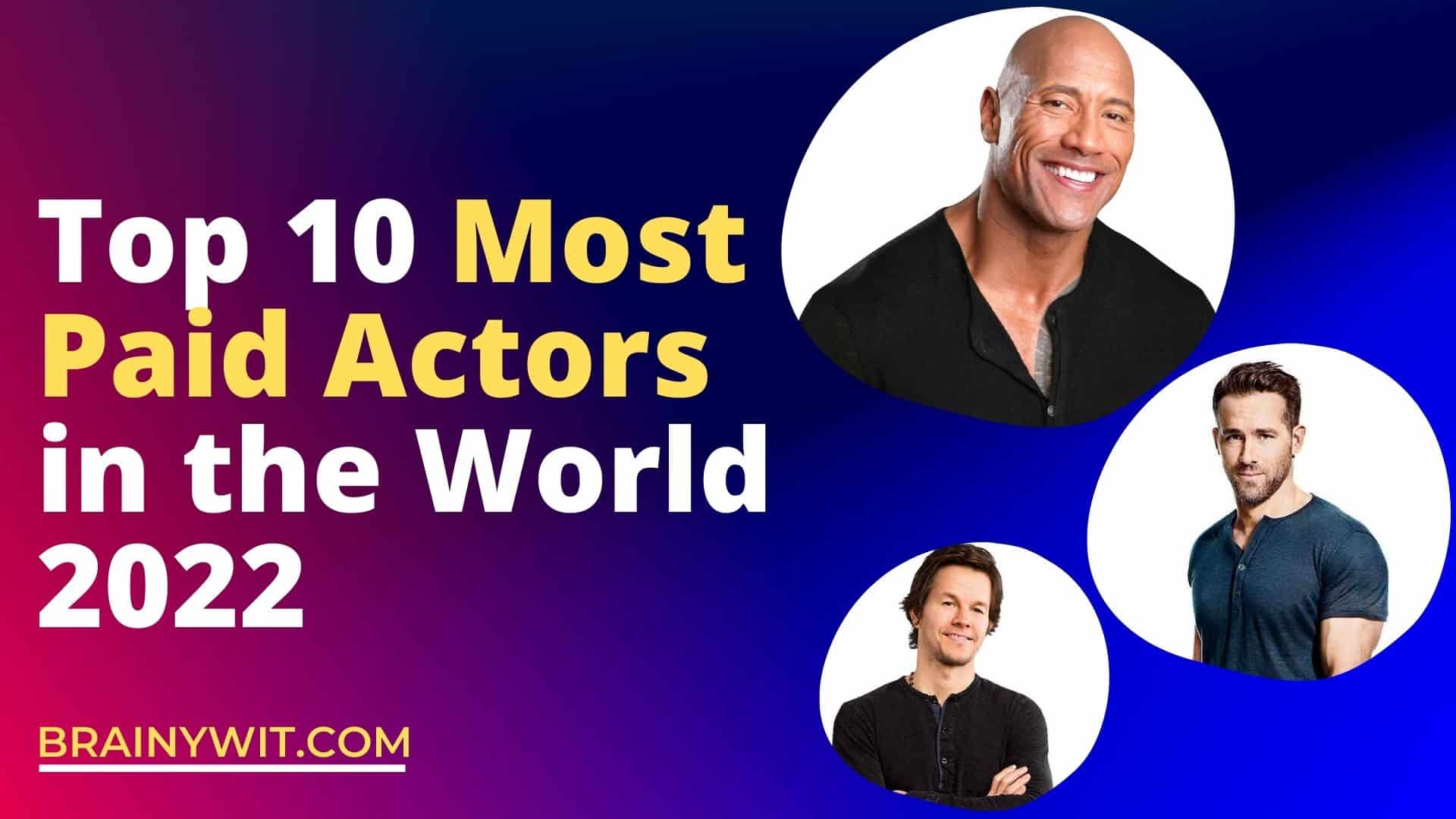 Who comes to your mind when it comes to the Most Paid Actors in the World? How much do you think the highest-paid actor makes? Curious to know? Let’s GO.

Corona Virus and the global Pandemic have made people adapt to a New Normal. Multiplexes and Primetime movie shows have been replaced by Netflix & Chill. Covid 19 struck a huge blow to the global film industry. However, the filmmakers have not given up hope and are continuing to work on their projects and films in anticipation.

OTT and Streaming platforms are growing in importance. The trick for Netflix is not in the blockbuster box office numbers but in the number of monthly subscriptions. Netflix is poised to spend more billions on acquiring content this year, more than any other studio on Hollywood’s greatest.

With so much money being shelled out by Netflix, Amazon Prime, and Hotstar, are you Curious to know who are the Top 10 most paid actors in the world in 2022?

Dwayne Douglas Johnson, commonly known as The Rock, is an actor, businessman, and former professional wrestler from the United States. He wrestled for WWE for eight years before pursuing an acting career. He is widely recognized as one of the best professional wrestlers of all time.

The people’s champion Dwyane “The Rock” Rock Johnson is currently the highest paid actor in the world.

Thanks to the $23.5 million cheques from Netflix, The Rock leads the list for the second year in a row.

The ex-WWE superstar tops the chart with his total earnings of about $88 million.

Ryan Rodney Reynolds is an actor & producer of Canadian-American descent. He has garnered numerous awards and nominations throughout his 30-year career in cinema and television, including a Critics’ Choice Movie Award, three People’s Choice Awards, a Grammy and Golden Globe nomination, and a star on the Hollywood Walk of Fame.

Ryan comes second in this list of most paid actors in the world with whooping earnings of around $72million.

With average earnings of $58 million Mark bags, the third place in the list of Top Paid Actors in the World in 2022.

Benjamin Géza Affleck-Boldt is an actor, film director, producer, and screenwriter from the United States. Two Academy Awards and three Golden Globe Awards are among his achievements. He started his acting career as a child on the PBS educational program, The Voyage of the Mimi.

After a brief hiatus, Ben Affleck returned to the big screen with a Bang.

Ben Affleck is a highly paid actor and comes 4th with his average earnings of $55 million.

Vin Diesel (Mark Sinclair) is an actor and producer from the United States. He is most known for playing Dominic Toretto in the Fast & Furious franchise and is one of the world’s highest-grossing performers.

Vin Diesel is the 5th highest paid actor in the world with his estimated average earnings of $54 million.

Akshay Kumar is a highly paid actor and the only Bollywood star on the list, with average earnings of $49 million.

Lin-Manuel Miranda is an actor, singer, composer, playwright, rapper, and director from the United States. He is well recognized for his work on the Broadway musicals In the Heights and Hamilton, as well as the Encanto soundtrack.

Currently, his average earnings are $46 million approximately making him one of the highest-paid actors in the world

Willard Carroll Smith II, popularly known as the Fresh Prince (stage name), is an actor, rapper, and producer from the United States.

Despite the Oscar Slapgate with him slapping Chris Rock, Will still manages to hold the top 10 spot among top paid actors globally. His average earnings are around $45 million

Adam Richard Sandler is an actor, comedian, and filmmaker from the United States. From 1990 to 1995, he was a cast member of Saturday Night Live before moving on to star in a number of Hollywood blockbusters that have grossed over $4 billion at the box office.

Thanks to his Netflix deals, this veteran actor who was lost in obscurity made average earnings of $46 million.

Jackie Chan, 成龍 (in Chinese), a Hong Kong actor, filmmaker, martial artist, and stuntman, is most known for his comedic acrobatic fighting style, comic timing, and imaginative stunts, which he usually does himself.

The martial arts legend is still going strong after six decades. He supplements his movie earnings with millions in sponsorship and licensing deals.

Jackie Chan comes 10th on the list of most paid actors with average earnings are $40 million.

While the worldwide box office will not fully recover until 2023, these A-listers are still getting paid well for their roles in these blockbusters.

FAQs About Most Paid Actors

Who’s the most paid actor in Hollywood?

Who has made the most money as an actor?

George Clooney with earnings of $239 million has made the most money as an actor.

Which actor has the most money in the world?

Jami Gertz is an American actress and entrepreneur best known for her roles in Twister, Crossroads, Less Than Zero, The Lost Boys, and Quicksilver. Jami has a $3 billion net worth.

Which actor getting more salary in world?

British actor Daniel Craig is the world’s highest-paid actor, thanks to a hefty deal of $ 100 million inked with OTT streaming service platform Netflix in 2021.

Thanks for Reading. Let us know any particular topic that tingles your curious bone and we would love to scratch the surface of that.

Rupparna is a development professional by training and a gourmand by passion. She loves reading and writing about food, geopolitics, law & social development. As diverse the interests, so are the writing styles she adopts. When she is not reading or writing, she can be found playing with puppies and sipping G&Ts.