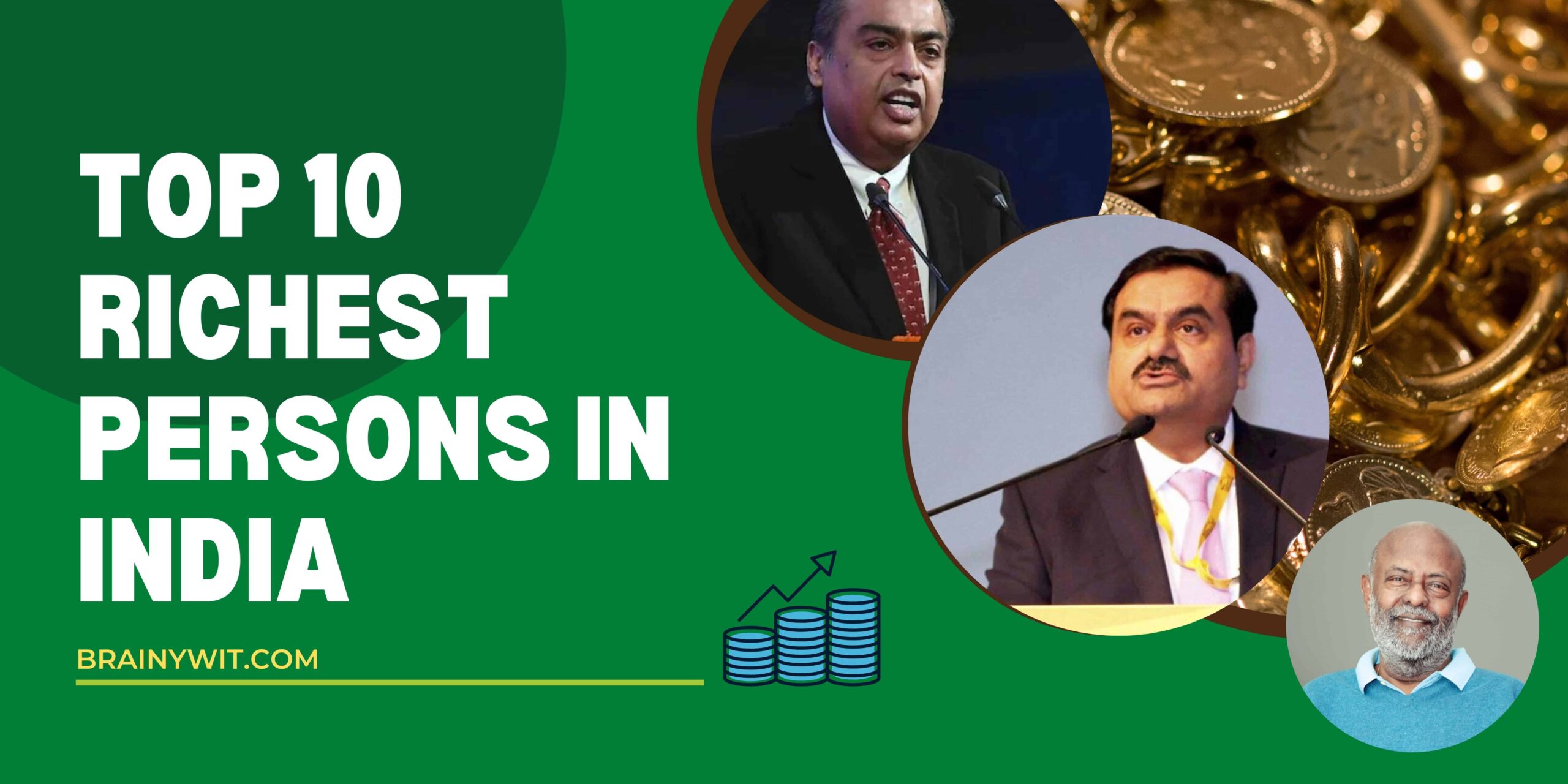 Who is the richest person in India? Did Covid 19 affect the wealth of the wealthiest?

At 166 billionaires, India ranks third after the U.S.A. (735) and China (607) in the Forbes list of World’s Billionaires 2022. The total number of Indian billionaires surged to a record 166, up from 145 last year, amidst a record year for IPOs in India—more than 60 companies raised a whopping $15.6 billion last year—and their combined fortune grew about 26% to $750 billion.

According to Knight Frank’s latest edition of The Wealth Report 2022, equity markets and digital adoption have been key factors driving growth in the super-rich category of India.

India is poised to become a superpower by 2025. To acquire this status, India needs to increase its per capita GDP to $5000 from the current $1000.

Let’s cut to the chase and check out the list of the richest people in India.

No Surprises here. Mukesh Ambani is still crowned as the richest person in India and Asia. He hung on to the No. 10 spot globally with a net worth of $100.1 billion.

Reliance was started in 1966 as a small textile firm by his late father, Dhirubhai Ambani, a yarn trader. Ambani and his younger brother Anil divided the family fortune after their father died in 2002.

Mukesh Ambani is the chairman and CEO of Reliance Industries, a $74 billion company with holdings in petrochemicals, oil and gas, telecom, and retail. Reliance Energy is being managed by Mukesh Ambani. Over the next 10-15 years, the firm plans to invest $80 billion in renewable energy and construct a new facility next to its refinery.

He is a huge Bollywood movie fan, and watches around 3 movies in a week because “you need some escapism in life,” Mukesh explains.

Gautam Adani, the infrastructure and commodities mogul, is the second-richest person in India and Asia. Having added roughly $40 billion to his fortune he is narrowly edging towards fellow Indian Gautam Adani. With multibillion-dollar expenditures anticipated over the next decade or so, both Ambani and Adani are driving India’s march towards green energy.

Adani Group was founded in 1988 and is now a key player in a variety of industries, including coal trading, coal mining, oil and gas exploration, ports, multi-modal transportation, and power production.

Adani’s international holdings include, The Abbott Point port in Australia and the Carmichael coal mine, hailed as one of the world’s largest. In his home state of Gujarat, he has command over the Mundra Port. In September 2020, he purchased a 74% share in Mumbai International Airport, India’s second busiest, and Adani Wilmar, a joint venture with the rich Kuok clan’s Wilmar International, is preparing to go public.

Adani’s vision is “To be a world-class leader in businesses that enrich lives and contribute to nations in building infrastructure through sustainable value creation.”

Gautam Adani’s estimated net worth is around $90 billion.

Gautam Adani has a roller coaster of a ride. He became a millionaire at the tender age of 20 years. In 1998 Fazlu Rehman, an underworld figure, abducted him for a ransom of $1.5 million and a decade later he escaped from near Death experience on 26 November, the day of the Mumbai Taj Hotel Terrorist attack in 2008 where he was having his dinner. “I saw death at a distance of just 15 feet,” Gautam told the media.

Shiv Nadar is an Indian IT trailblazer & philanthropist who founded HCL technologies in a garage in 1976 to manufacture calculators and microprocessors.

Today HCL Technologies has 198,000 employees in 52 countries, a turnover of $11.2 billion, and is one of India’s major software service companies.

HCL entered the worldwide market in 1980 with the establishment of Far East Computers in Singapore to offer IT gear, with an investment of Rs. 187,000. In its first year, the venture made a profit of Rs 1 million.

He stepped down as chairman of HCL Technologies in July 2020, passing the reins to his daughter, Roshni Nadar Malhotra. He now serves as chairman emeritus and strategic advisor to the company. In 2021 C Vijayakumar (A.K.A CVK) was selected as the chief executive officer (C.E.O.) and Managing Director of HCL Technologies.

Shiv Nadar currently has a net worth of $28.7B.

Shiv Nadar was awarded the Padma Bhushan in 2008, the third-highest civilian award preceded by the Bharat Ratna and the Padma Vibhushan and followed by the Padma Shri.

Shiv Nadar is known as “Magus,” which translates to “Wizard.”

Cyrus Poonawalla, the son of a horse breeder, founded Serum Institute of India in 1966 and grew it into the world’s largest vaccine manufacturer.

Serum invested $800 million in a new plant to create Covid-19 vaccines under the leadership of his U.K.-educated son Adar, the company’s CEO. They also manufacture roughly 1.5 billion doses of vaccines per year, including those for measles, polio, and the flu.

Poonawalla’s privately held Serum Institute of India, which manufactures the Covishield vaccine under license from AstraZeneca, supplied a large portion of the 1.8 billion Covid-19 vaccines administered to Indians so far.

In 1974, the Serum Institute, under his direction, introduced the DPT vaccination, which protects children against diphtheria, pertussis, and tetanus. The Indian government has awarded the vaccine billionaire the Padma Bhushan in 2022, one of India’s highest civilian awards, in acknowledgment of his achievements.

We think Cyrus is “All Work No Play”. He prefers to be little known and focuses on the manufacturing of life-saving serum.

Damani began his retail career in 2002 with a single store in Mumbai’s suburbs. He now owns 214 DMart locations in India. After the IPO of his grocery chain Avenue Supermart in March 2017, veteran Mumbai investor Radhakishan Damani became India’s retail king.

Radhakrishnan Damani is considered as the country’s wealthiest trader, with an estimated portfolio of $20B as of 2022. He is also a shareholder in a number of businesses, including tobacco company VST Industries and cement producer India Cements.

The 156-room Radisson Blu Resort in Alibaug, a renowned coastal hideaway near Mumbai, is part of his alluring portfolio.

He was considered the 4th richest person in India in 2021 by Forbes. Damani slipped one position this year.

One of the lesser-known facts about RK Damani is that he was the guru of Rakesh Jhunjhunwala, India’s most famous stock market king.

Radhakrishnan Damani, or RK Damani, is known as “Mr. White and White” because he always wears white.

Lakshmi Mittal is the chairman of ArcelorMittal, the world’s largest steel and mining corporation by output, with a revenue of $76.6 billion. He was born into a steel family and split from his siblings to found Mittal Steel, which he later merged with France’s Arcelor in 2006.

Arcelor and Nippon Steel concluded their $5.9 billion acquisition of Essar Steel in 2019, which was formerly owned by billionaires Shashi and Ravi Ruia.

Steel prices climbed in the last few years, boosting the wealth of ArcelorMittal’s executive chairman. In 2021, the corporation had a $15 billion profit, compared to a $733 million deficit the previous year.

The six-day wedding of his daughter Vanisha Mittal and Amit Bhatia holds the official title of ‘most expensive wedding’ in Guinness World Records history. The wedding took place in Paris, and the total cost was estimated to be around $55 million.

Savitri Jindal, the widow of founder Om Prakash Jindal who died in 2005 in a helicopter crash, is the emeritus chairperson of the O.P. Jindal Group, a steel and power giant named after her late husband, profited from surging shares of group firms JSW Steel and JSW Energy.

Her four sons, Prithviraj, Sajjan, Ratan, and Naveen Jindal, operate divisions of her company/Savitri has a net worth of $17.7B in 2022.

Making a jump of two-position Kumar Birla becomes the 8th richest person in India in 2022.

Kumar Birla is the fourth-generation head of the renowned Aditya Birla Group ($45 billion in revenue) named after his late father (Aditya Vikram Birla) and has served as chairman since 1995.

The company’s business activities range from cement and aluminum to telecommunications and financial services. When Birla’s father, Aditya Birla, died in 1995 at the age of 28, he inherited the family fortune.

In 2004, Birla acquired a majority stake in L&T cement and later renamed it to UltraTech Cement.

In 2018, the Aditya Birla Group’s Idea Cellular combined with Vodafone India to form Vodafone Idea Ltd, India’s largest telecom service provider. However, he resigned in August 2021 as chairman of Vodafone Idea, a debt-ridden telecom company formed by this merger.

He is chairman of IIT Delhi, IIM Ahmedabad, chancellor of the Birla Institute of Technology & Science, and chairman of the Rhodes India Scholarship Committee for Oxford University.

Dilip Shanghvi, the son of a pharmaceutical distributor, started Sun Pharmaceutical Industries in 1983 with a $200 loan from his father to manufacture psychiatric medications.

In 2022, Sun Pharmaceuticals with $4.7 billion in annual revenue, is India’s most valuable listed pharmaceutical company and makes Dilip Shanghvi the 9th richest person in India. Dilip has a net worth of $15.6B in 2022.

Shanghvi built Sun through a succession of savvy acquisitions, the most notable of which being the $4 billion purchase of rival Ranbaxy Laboratories in 2014. Shanghvi has also made investments in renewable energy as well as oil and gas.

Sun Pharmaceuticals is the world’s fourth-largest manufacturer of specialty generic pharmaceuticals. International markets account for two-thirds of Sun’s revenue. In March, the business agreed to pay $485 million to resolve long-running litigation in the United States against its subsidiary Ranbaxy Laboratories, which was bought in 2014. Shanghvi, who created Sun in 1983 to produce psychiatric medications, is still the managing director of the company.

The business baron was also honored with the Padma Shri in 2016 and ranked eighth on India Today magazine’s list of India’s most powerful individuals in 2017.

Uday Kotak left his family’s trading company to start a financial firm in 1985, which he then converted into Kotak Mahindra Bank in 2003 after receiving a banking license from Reserve Bank of India.

Kotak Mahindra Bank has risen to become one of India’s top four private banks after sealing a $2.4 billion acquisition in November 2014 for rival ING Vysya Bank, which is partially owned by Dutch financial services giant ING, Kotak almost doubled his wealth in 2014. Shares of his Kotak Mahindra Bank hit an all-time high. Canada Pension Plan Investment Board is also one of the investors.

He was elected Ernst & Young World Entrepreneur Of The Year in June 2014.

The 811 apps, developed by Kotak, are named after November 8, 2016, when the government canceled 86 percent of all rupees in circulation.

He was reported to be one of the highest-paid CEOs of many Indian banks in August 2019, with monthly compensation of 27 lakh (US$35,000).

Kotak sold some shares in June 2020 to lower his shareholding in the bank, as required by the Reserve Bank of India.

For the 2020-21 fiscal year, he was elected President of the Confederation of Indian Industry (CII).

It’s no secret that Kotak has a strong connection to cricket. He was a talented athlete who aspired to play cricket professionally.

In 1979, while playing cricket, Kotak was struck in the head by a ball and nearly died. After emergency surgery, he was rescued. He had to give up his cricket dream due to a head injury.

In an interview with The Economic Times, he shared, “I regret not becoming a professional cricketer. I was hit by a cricket ball and I had surgery when I was 19 years old and that changed my life. My family stopped me from playing cricket or else I would be a cricketer now talking about cricket and sports which is a big passion for me.”

With this, we come to an end of the list of the Top 10 richest persons in India in 2022. We saw a few jump the ladder and some slip down as well.

It is observed that with The Global Pandemic amidst us, the pharma sector saw growth, obvious with the trillions of covid vaccines delivered and many boosters still in line.

Against all odds, we clearly see that even the list has changed here and there, one thing in common, everyone on the list made more money. Strange isn’t it. Well, that tells us Chaos brings Chance while Curiosity brings Opportunity.

Don’t miss the chance at your opportunity.